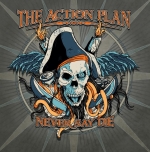 Bristol four-piece The Action Plan have no qualms about pinning their pop punk influences firmly to their collective chest. Whether that leads to particularly positive results is debatable but in the case of ‘Never Say Die’ it has lead to at least eight solid songs.

Opening track ‘Hometown Hero’ kicks straight in with strong guitars and thumping drums and builds to a great chorus, unfortunately not before showcasing my biggest issue with this record as a whole – unnecessary digital effects. This song features more than a healthy amount of electric drum sounds and an obscene level of vocal delay. This would be a much better track if not for the impression that The Action Plan are almost afraid to have breaks between vocals, so filled these gaps are by the last lyric echoed multiple times.

Second track ‘Believe it or Not’ starts with promise. A slow intro bursting to life before launching into a wonderful, fun chorus featuring a great little keyboard line reminiscent of some early The Wonder Years songs. By the time this track fades out to make way for ‘Had It All,’ my interest is truly peaked and despite the return of the electric drums, The Action Plan are in good territory throughout. Man Overboard might get away with releasing this one.

‘Live Strong’ begins with a fast, twiddly riff that breaks into a song driven along by strong, if not exactly original drumming, and dives headfirst into yet another sweet power-pop chorus. Complete with regretful lyrics in turn equipped with positivity enough to tip the scales well away from the awkwardly teenage end of the pop-punk spectrum. It’s another good track that reminds me of so many of my favourite bands and there’s no denying the passion this four piece have for what they’re doing.

Title track ‘Never Say Die’ is sadly a little too miss-able. It never really gets going and despite some good guitar playing throughout, something of a lull elongated by ‘This One’. “This one’s for all the people that can’t seem to find themselves,” come the lyrics over another similar drumbeat before breaking into another similar verse and chorus. It feels a tad tacky, even if it is well written. By this point in the record The Action Plan seem to have lost their way a little. These aren’t bad songs but they could be better and the whole record begins to merge into one anamorphous blob for a short while.

‘Never Say Die’ ends on ‘Suits and Ties’ which, following an unnecessary and frankly odd intro of almost a minute turns out to be a return to form. Choruses are definitely a forte for The Action Plan and the band take this one last opportunity to prove so with another killer – perhaps their finest.

This is by no means a bad record, it’s enjoyable, well crafted, and there’s a good chunk of fun thrown in for good measure, but it’s hampered by its problems more than carried by its successes. It reminds me of so many bands I love whilst remaining ever a step off the mark. The overuse of effects on both the drums and vocals hinders the listening experience by making ‘Never Say Die’ feel too artificial in places. Regardless of these issues though I’d keep an eye out for this band. This is an imperfect record showing plenty of promise.

‘Never Say Die’ by The Action Plan is released on 10th December.