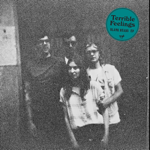 In this day and age, when the charts are bloated with the worst songs that identify themselves as “good pop music”, it is important to realise that there is a simple but tasking solution to the problem i.e. getting a large sieve and filtering out the good from the bad for countless hours. After what seems like an eternity since you’ve lost track of time and have nothing but dark bags under your eyes, you eventually find that your efforts were not so fruitless after all and you have now found a perfectly good band that play pop music that’s of an honest and hearty quality. This is certainly the case after listening to the new EP from Swedish lot Terrible Feelings.

As a record, the production on ‘Blank Heads’ has a shimmering 80’s alt rock aura to it; this provides an experience of easy listening that is very comforting indeed. The melodies that shine through every thread found in the band’s punk inspired fabric accompanied by the very strong and passionate sounding vocals of Manuela Iwansson will only allow a nice warm feeling to develop inside you that will stretch across to every tip and point of your body causing you to display affections of happiness. Such a reaction contrasts perfectly to the sincere and sombre themed nature of the band’s lyrics.

If there is one criticism it would be a missing kick to the chest that collapses your lungs and causes you to be in desperation for the oxygen that gives you the sheer will to cling on and hold for dear life; if such an action to reaction formula was added then maybe the band’s grip would be stronger than ever with their indie post punk hooks. However, ‘Blank Heads’ is a solid introduction to a band that has plenty of potential in them to survive the long road ahead.

‘Blank Heads EP’ by Terrible Feelings is out now on Freedom School Records.