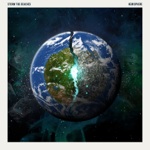 We may as well get down straight down to brass tax here. With ‘Hemisphere’, Baltimore four-piece Storm The Beaches have produced an absolute wonder of a record. Is it rock, pop, pop-punk, indie, or as bassist Jon Adams calls it, “Smart Pop”? It doesn’t matter so long as the band continue producing music like this.

‘Hemisphere’ arrives with the atmospheric riff from third single ‘The Bittersweet’ before the vocals, drums, and bass follow up to give the album an enormous sound from the off. This track’s chorus demonstrates what Storm The Beaches have going on here – instrumentally they are very, very good but singer Mark Mikina steals the show – not just here but for the remainder of the record. Despite being a strong opener and display of the band’s skill ‘The Bittersweet’ is far from ‘Hemisphere’s’ best track. Each song sets out to top the last and for the most part succeeds.

Second track ‘Good Advice’ again showcases the band’s ear for a chorus, before giving way to first single ‘Someday Came Suddenly’ – a powerful track melody to die for. By fourth track ‘Get Back Up’ it’s difficult to see how this album can continue rising. At the midway point that is ‘Somewhere’, Storm The Beaches have managed to maintain the quality and despite something of a plateau across the middle of the album all is well – it’s a good place to be.

A standout track is difficult to pick due to the quality of songwriting on show but I’ll throw out ‘Palm Reader’ as it’s a little darker, more touching. Mikina’s voice rides the music and not only is he vocally at his best here but the lyrics are wonderful – it’s not a case of using the right words and singing them well either, the vocal melodies are as good as any, intelligent lyrical choices making them as much an instrument as the smart guitar playing that flows throughout.

At 15 tracks long you’d be forgiven for thinking that Storm The Beaches had overdone it a little. This is a long album, coming in just past the hour mark and my patience has varied with each listen. Sometimes I’ve been unable to stop before the end, other times I’ve found myself needing a little break from it. As difficult as it would be to cut tracks from this record it would likely benefit from being a few songs shorter – not because there are weak songs but to avoid a case of too much of a good thing. Any album this long will struggle to be heard in full and with the tracks at the end so strong it may have done to cut a couple from the middle.

You will not be blown away by the originality of this record, we’re walking paths long tread by giants, there are definite shades of Something Corporate, ‘Devil and God’ era Brand New, and even Paramore here, but that’s perhaps the beauty of ‘Hemisphere’ – it’s like fresh tarmac on an old road; suddenly you don’t mind riding the bus that way again.

‘Hemisphere’ by Storm The Beaches is out on the 13th November through Apparition Records.