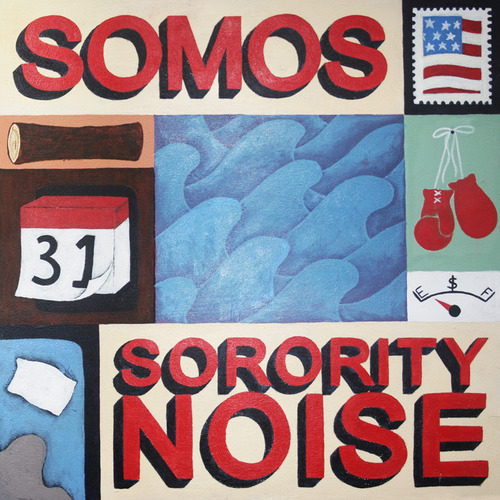 Split, n. : a recording containing songs by multiple artists. Only more often than not, one could freely interchange the bands and little to no difference would be felt. The very idea of a split, admittedly, is for one band’s fanbase to be introduced to another, most often operating on very similar terrain. What this writer wants is for the close-knittedness of splits’ generic permutations to be extended to something more akin to a ballpark. We’re not quite there yet with Sorority Noise and Somos, but to their credit, both bands find great success in giving their indie-tinged pop-punk enough of a distinctive flavour to avoid genre-fatigue.

On the one hand, you have Connecticut’s Sorority Noise. On the back of releasing their profoundly, and quite likely knowingly, mistitled LP Forgettable, an excellent collection of clever power-pop songs, as lyrically striking as they are infectiously catchy. Their approach is decidedly more low-key on the two tracks they provide here. ’Dobranoc’ plays like a gentle half-track, a restrained introduction to the somewhat more conventional ’Wesleyan’s Best Dressed’, in which upbeat melodies, bittersweet lyrics, fuzzy production and a delightful little solo overlap to great effect.

Somos, on the other hand, continue to explore their unusual brand of lightly punk-inflected pop-rock, building on their obvious skill for big choruses by reeling them in just a bit. ’Letters To An Absent Future’ doesn’t have quite the same immediacy as their tracks did on ‘Temple Of Plenty’, but that’s to their credit. The result is mature pop-rock track that avoids easy pay-offs, preferring understated, yet undoubtedly catchy, choruses, and unusual vocals. One might’ve forgiven them for providing something a little safer to go with that first track, but we are instead dealt ’Back And Forth’, more proof that Somos are currently crafting some of the more odd pop-rock songs out there.

All in all, the split seems like a win-win for everyone, in the sense that everybody gets to discover some good bands by way of good, if unusual, tracks. In this lovely little package of American goodness, everyone’s a winner, though mostly you if you end up seeking this out.

‘Split’ by Sorority Noise and Somos is out now on Bad Timing Records.