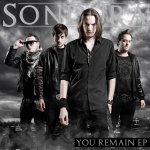 Being a huge fan of classic rock music, on first listen I quite liked Sondura’s take on it, putting their own modern twist on it, bringing in more recent influences. Having listened to the EP a fair few times, I think I’ve come to know it pretty well, and I can hear different influences in every listen, almost to a worryingly degree of similar sounding songs – ‘New Beginnings’ which I will get to soon enough.

‘You Remain’ is a solid track, and listening to a different band to review every week, I have to give my props to these guys for the recording quality; very professional sounding. I want to like these guys, they’ve got the sound down, the cliché chorus’, and the 4 chord trick used in every damned song you’ll hear on the radio. As much criticism I have for this song, I do actually quite like it. Some cringe-worthy moments arise though, certain lyrics sung sound very American-esque, almost ruin the song for me. The powerful chorus is a match for any other stadium rock band, and the riff at the end blew away all apprehensions and thoughts of clichés. If the singer sang more like he does at the end of this song, with the grit and force he is obviously capable of, these guys would have more of an impact.

Now, onto ‘New Beginnings’. This is where their influences start to show. Obviously fans of Alter Bridge, this song is so similar sounding to ‘Rise Today,’ that I wonder how they even thought they could get away with it. I don’t want to go into it much more, but I can’t listen to this song seriously, and Sondura’s credibility as a band has been shot down in my eyes. The one saving grace for this song is the solo and riff played with it; so heavy and big sounding, it almost made me forgot about the Alter Bridge rip-off.

‘Live Before You Die’ is another song which makes me lose faith in these guys. Opening with a great riff, very reminiscent of Nickelback, the song even has the same crass style lyrics associated with the non-radio friendly songs by Nickelback. If that wasn’t bad enough, just hearing the line “you’ve got to live before you die” ironically makes me die a little inside. I can’t take this song seriously with a line like that. Towards the end of the song you hear more of the edgier side of Tom Watson’s voice, especially that scream. Its just a shame that it can’t do much for the music.

Not a band that’s shy to show their influences, ‘Falling Free’ is very Creed – the band who went to form Alter Bridge with a different singer. I actually like this song, ‘yeah yeah yeah’ style vocals could be left out, but I guess these guys aren’t afraid to include clichés. I’m a sucker for rock ballads when they’re done well, and this one has pulled me back in their favour. My favourite song from this EP.

Sondura are obviously a talented band, and the music is very good, its just a shame it couldn’t be more original. With rock music in America being very stale and watered down at the moment, I would’ve thought it would be more obvious to try to be more original, I just guess it hasn’t reached this side of the waters yet. Maybe. Considering this is an EP, a full length may have a lot more to offer.

‘You Remain’ EP by Sondura is available now on Transcend Music.