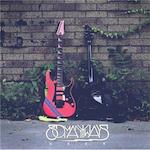 So Many Ways are completely ridiculous. Somewhere between Avenged Sevenfold and Van Halen is ‘Seer’ and it’s just great fun. Opening track ‘Twisted Heat’, with its applicably 80s name is a perfect example of a band who weren’t quite settled on whether they were going to thrash or shred, so they just did both. The verse sections are rapid, low, and heavy; the choruses, I’m almost positive, summon down mullet-sporting eagles somewhere in the world each time they burst through the speakers.

There’s a little bit of me that wants to hate this EP. There’s no denying that it’s a little silly – anything with this much pure riffage is always going to be so – and there’s something about it that just conjures an image of Wyld Stallyns. That said those are probably the reasons why I can’t help but love it a little. Take ‘Pen Island’ as an example, this song has one of the most obscene guitar solos I think I’ve ever heard. Immediately afterwards ‘SMTWTFS’ goes on for long periods as almost pure solo, with the exception of a rather dramatic call and response section.

‘Seer’ closes with another magnificent title: ‘Astral Beast’. Like ‘Twisted Heat’ at the opening, this one lives up to the pure 80s cheese of its name. Sweeping guitar runs, slamming drums, soaring vocals, and, the cherry on the cake, a nice long fade out.

Vocalist Colin Corley’s claim that, “we are all just a bunch of hardcore/metal heads with a deep passion for Top 40 radio, 80’s metal, and all things guitar,“ could perhaps do in place of a review at all, so perfectly does he sum up So Many Ways.

’Seer EP’ by So Many Ways is out now on Staple Records.

So Many Ways links: Facebook|Twitter|Tumblr