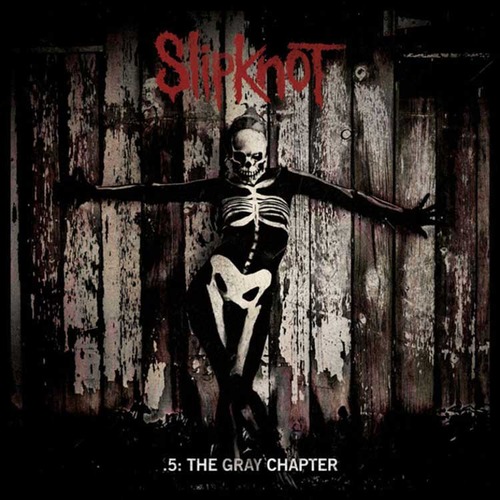 A lot can happen in six years. From the release of their 2008 album ‘All Hope Is Gone’, Slipknot have undergone a tumultuous amount of activity. We’ve seen new album releases of side projects, the formation of an annual festival created by the band themselves (Knotfest), and even the departure of original drummer Joey Jordison. But the most prominent, and certainly most affecting, was the untimely death of bassist Paul Gray. Passing away in 2010, Gray serves as the main focal point of the new album. Ranging from lyrical themes to possibly even inspiring the album’s title ‘The Gray Chapter’, Slipknot fully display the impact Paul’s death has had on the band.

But on with the record. ‘.5: The Gray Chapter’ in terms of sound, seems to be a combination of both their older and newer material. Tracks such as ‘Nomadic’ and ‘AOV’ offer their own heaviness, yet with surprisingly catchy choruses, parts of the album bear resemblance to previous album singles such as ‘Psychosocial’ and ‘Sulfur’, and even influences of side project Stone Sour seeps through at times.

Saying this however, Slipknot certainly still acknowledges their heavier past as well as their older influences. For instance, tracks such as ‘The Negative One’ and ‘Sarcastrophe’ feature Corey maximising the potential of his vocal abilities, ripping into the songs like an animal possessed. Armed to the teeth with the chaotic, signature riffs that Slipknot utilise so well, either of these tracks could have easily fit on ‘Iowa’ just as much as this record. And let’s not forget eleventh track ‘Custer’, which opens with a buzz-saw screech reminiscent of the signature guitar wail used by Slayer, as well as sharing similar vocal effects as ‘Duality’.

Nonetheless, Slipknot don’t really add anything that new to this record, but rather touch upon and improve their sound. That being said however, there seems to be a few oddities that the band has added to enhance the overall tone of the album. Taking the twelfth track for example, ‘Be Prepared for Hell’ acts as a build up for lead single ‘The Negative One’. However, the creepy interlude alone serves as an intriguing listen.

Another surprise was the track ‘Killpop’, as it’s seems to be the band’s own take on a conventional pop song. Adding the disturbing Slipknot trademark, the narrator of the track describes the pleasure he feels as this woman maims herself both physically and mentally. Of course, this track alone may be a statement towards the mainstream music that is ruling the charts, or simply a creepy twist to a generic love song, yet I can’t help but feel a sense of irony with a name like ‘Killpop’, when the rest of the album features some of Slipknot’s most accessible tracks yet (see ‘AOV’, ‘The Devil In I’).

Regardless, the topics that the album covers lyrically shifts mostly towards the aforementioned Paul Gray. The tone surrounding him however, changes dramatically. Sixth track ‘Skeptic’ practically explodes off of the record, teeming with emotion. As Corey Taylor roars throughout the chorus; “The world will never see a crazy motherfucker like you”, Slipknot have arguably created one of the most adrenaline-fuelled songs ever in regards to celebrating someone’s life. Yet, the polar opposite of this track emerges merely two tracks later. Titled ‘Goodbye’, this slow burner of a song gradually builds up until it’s almost cathartic release two minutes in. Exploring how the death of Paul truly affected the band, ‘Goodbye’ stands as a testament to not only Paul Gray, but of what the band has had to face in the past, of what they’re dealing with in the present, and what Slipknot will face in the future.

Admittedly, at some points ‘.5: The Gray Chapter’ does tend to drag on, and I think it can be said that there are perhaps one too many filler tracks. Yet as a whole, none really disrupt the flow of the album. And so overall, and to their utmost credit, Slipknot have made nothing but a truly honest album, relinquishing their emotions on the death of their former bandmate. And I believe that with this record completed, Slipknot can finally move forward onto the next chapter of their careers.

‘.5: The Gray Chapter’ by Slipknot is out now on Roadrunner Records.