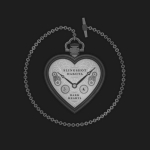 Slingshot Dakota are an American two piece indie-punk band starring the talented Carly Comando and Tom Patterson, from Bethlehem, Pennsylvania. The duo has a unique refreshing style and sound, with a variety of instruments combined with an electronic symphony.

‘Dark Hearts’ is gleaming with originality, with soulful heart-filled lyrics graced with Carly Comando’s beautifully sweet vocals. Every track featured on the record is different from the next, starring awesome acoustic guitar, piano, and drum work.

The album begins with ‘Intro,’ an emotional instrumental piano piece that really sets the tone for the album: dark and eerie. The next track ‘May Day’ is on a different level, with twinkling noises on beat with the vocals: it’s upbeat, playful and child-like. The lyrics however still reflect the darkness with “We’re waiting for our friends to die.”

‘Dark Hearts’ changes swift with fast-paced ‘Rasta Bacca,’ a punky hit with amazing drum work combined with rocky wirey electro beats. ‘Never Hear’ follows in a similar style but with a mellow slow-paced tempo and catchy lyrics. The chorus is original with its overlaps, quickening pace and backing vocals.

The track ‘Starting Over’ is another slow paced emotional piece, but the melody is almost trance like. The combination of drums and vocals at the same time is purely mesmerising. ‘Light’ follows on a similar route, but breaks into a powerful punky tune with heavy drums and hard-hitting vocals.

One of the top powerful tracks from the album is ‘Living/Dreaming:’ it has exceptional piano work and a truly amazing melody, which is then mixed with hard hitting rocky drums and heavy deep electronic keyboard sounds.

The favourite from the record is ‘Cassette.’ Your ears are delighted with ambient acoustic guitar riffs and soothing soft vocals. This then suddenly breaks into powerful piano work, and hard-hitting lyrics such as “there is a tiny voice and it says I love you.” The song finishes with a hardcore rock style with powerful vocals. The album has a fantastic ending with ‘Good Year,’ the track is completely hypnotic with yet again more outstanding piano work.

‘Dark Hearts’ is an outstanding innovative album, and we recommend it to anyone who loves a female singer or simply loves finding new quirky bands.

‘Dark Hearts’ by Slingshot Dakota is out now on Topshelf Records.