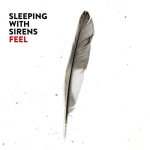 If you’re used to categorizing the Michigan-based five-piece Sleeping With Sirens as a post-hardcore band, you better forget about that. Their new album, ‘Feel,’ is anything but hardcore, and the band is searching for a different sound to set them apart.

From the very first track, ‘Feel,’ you know something drastic has happened, because the radio-friendly boy-band rock of this song is nothing like the “typical” Sleeping With Sirens sound. There’s not a lot going on instrumentally in the first track, and this follows with several more, like ‘Here We Go,’ ‘Free Now,’ and ‘I’ll Take You There;’ all tracks with some nice moments of edginess or catchiness that Sleeping With Sirens has been so good at in the past. However, the mellow, restrained sound that seems to be their new direction is devoid of the innovation and absolute talent the band has.

‘Alone’ is a confused track, with electronic R&B style beats and some slow, tone-downed melodies and instruments. Rapper MGK is featured on this album, and the rapping comes off as awkward and off-putting. The party-rock sound of ‘Déjà Vu’ also sets itself apart in the same confused way, with extremely sexual lyrics that clash with the overall heartfelt and deep lyrics on the rest of the album. These oddball tracks sort of define the nature of this album. It is a bit all over the place in terms of style and they seem to struggle with finding a solid sound.

While overall, the album is a poor representation of what Sleeping With Sirens is actually capable of musically, there are a few bright spots. ‘The Best There Ever Was’ features gritty screams from Quinn, an unexplored facet of his often angelic clear voice. This track is much more hard rock than anything, and if this album is at all hard, it skews to hard rock rather than hardcore. ‘Congratulations’ is another hard-rock track, with a harder sound and that gritty sound from Quinn.  The catchy, electronic, memorable ‘Low’ is a great example at what the band is able to write. It is interesting and complicated and makes the album’s shortcomings glaringly obvious.

Sleeping With Sirens was once one of my favorite post-hardcore bands. I associated them with intricate and interesting heavy instrumentals contrasted with Quinn’s crazy vocal range and some truly brutal screaming. However, that sound is a thing of the past. This happens often with bands that may have been a bit forced to fit a mold and feel a need to break out; ‘Feel’ is that album. The band is desperately searching for a new sound and a new musical identity that just misses the mark as far as creativity and talent and instead made them generic and bland. Hopefully this is temporary.

‘Feel’ by Sleeping With Sirens is out now on Rise Records.