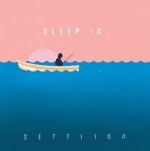 It may be a term that started life as an irritating journalistic gimmick, but it seems the “emo revival” is well and truly here to stay. As the twinkle(grand)daddies continue to reunite left, right and centre (Mineral and American Football are set to play shows in 2014, and Braid are releasing their first album in 16 years), the younger bands they have influenced continue to release incredible music; continuing the genre’s rude health of last year which boasted wonderful records by the likes of Crash Of Rhinos (R.I.P.) and The World Is A Beautiful Place And We Have A Really, Really Long Name amongst others, with The Hotelier being the latest name on everyone’s lips this year. On this debut full-length, New Jersey inhabiting quintet Sleep In look to join the pantheon of the hottest names to drop amongst vinyl-crazed, plaid-clad, strongly-bearded emo obsessives. It’s certainly a strident effort for a first release, inheriting the chunky hooks and blissful harmonies from Jimmy Eat World and combining them with the more widdly, noodly elements of bands like TTNG (formerly This Town Needs Guns) and Look Mexico – not the most obvious of kissing cousins, but on ‘Settling’, it appears to create predominately a winning formula for Sleep In – but not without its stumbling blocks.

Sleep In’s guitarist Eric McNelis was formerly a member of The Progress, a band which also contained a certain Evan Weiss, better known as Into It. Over It. There are touches of Weiss-esque songwriting here, particularly on ‘A Lot To Say’ towards the end of the record, but opener ‘I Do Know And I’m Not Sorry’ is pure power-pop, a simple but emphatic start to this multi-faceted record. ‘Sleep Sound’ sees the band introduce the mathier elements of their music, coming across as a reborn version of early Minus The Bear, which can certainly never be a bad thing. However, as the naked guitar line of ‘Bound To Fold’ allows Keith Badtorff’s vocal to come to the fore, and while he is in possession of a good set of pipes for this genre’s standard, it’s a fairly generic voice – if you weren’t concentrating very hard, this could be confused for bland AOR superstars Counting Crows, a comparison that is hard to remove from your head once it’s been heard.

Thankfully, ‘Antisocial Darwinism’ brings an element of grit to proceedings on an album that was threatening to float away in a bubble of its own niceness; that and the aforementioned ‘A Lot To Say’ start the second half of the record in fine fettle. The band have made a huge leap from a demo to a full-length album, but the travails they have experienced in other bands (not only The Progress, but Sleep In also boast members who are veterans of the Philly post-hardcore scene) have added an aura of maturity to this record, especially visible on tracks like ‘Come Closer’, a subtle ballad that unfolds rather than going straight for the metaphorical emotional jugular. Penultimate punchy number ‘Starting Over’ sounds like what would happen if Nate Mendel got his bands confused and started playing a Foo Fighters song whilst with Sunny Day Real Estate (or vice-versa); however the record ends on a bum note, with the eponymous closer ‘Settling’ bringing those widescreen American radio rock comparisons back to mind.

With summer just around the corner (well, it didn’t rain on at least two occasions this week), an album like ‘Settling’ may be just the record to engender the “vibes” on a lazy afternoon. However, for all its laudable inventiveness in successfully melding the worlds of stadium emo (stadiemo) and dynamic math rock, this record is rater lacking in edge; even in comparison to some of the poppier stuff on Topshelf, this seems a little fluffy and safe. Sleep In have used their combined experience to good effect here, and while this is a competent and promising debut, with some truly lovely moments such as the backing “ooohs” on ‘Small Scars’, it doesn’t seem the Garden Staters are quite sad enough to create a real triumph of a record with ‘Settling’. Come back to us when your girlfriend’s left you, gents.

‘Settling’ by Sleep In is out now on Hide Away Records.