Album Review: Shook Ones and Death Is Not Glamorous – Split 7″ 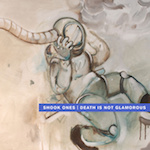 If you’ve stumbled across this review, you’re probably already familiar with the constituent parts of this split release, but for those who may be a little newer to the world of hardcore punk, Shook Ones and Death Is Not Glamorous are two essential adds to your burgeoning collection. If you’ve already caught up with genre progenitors like Lifetime and Kid Dynamite, and are into the latest batch of plaid-shirted, gruff-voiced punk rockers but wondering what came in between, look no further. On one side of the split, we have Shook Ones, who celebrate their tenth anniversary as a band in 2014, released a genuine genre classic back in 2006 with ‘Facetious Folly Feat’. On the other, Death Is Not Glamorous , a band whose acronym should please microwave fans, are Norway’s prime punk export – not much of an achievement when you consider the country is predominately known (musically) for black metal and A-Ha, but anyone who’s ever borne witness to this band live will attest to their brilliance.

The 7" showcases the two bands at their finest – though some surprises may be in store here for existing Shooks
fans. Known primarily as a fast-paced hardcore punk act herewith, their brace of contributions displays a more melodic side to them, more reminiscent of The Replacements and Samiam than aforementioned luminaries. It’s a much better use of vocalist Scott Freeman’s voice than any preceding work, and a more rounded approach rather than a full-frontal assault really suits the Seattle quintet.

DING’s double whammy show less obvious progression, but when their melodic hardcore sounds as good as it does on tracks like ‘Will’, it matters very little. Few bands straddle the line between “sounding too hardcore” and “sounding too pop-punk” as well as they do, and the minute-long blast of ‘Dear Friends’ will leave you baying for more.

Just 500 of these split records are being released and this 7” should deservedly fly out of the door – 2013 has been a banner year for Run For Cover Records, and this EP proves no exception. Shook Ones and DING haven’t released a full-length since 2009 and 2008 respectively, and their fanbases will be hoping this is a small morsel ahead of a punk rock feast ahead; no matter what lies ahead for the bands, this is undoubtedly a tasty little release.

‘Split 7”’ by Shook Ones and Death Is Not Glamorous is out now on Struggletown Records/Run For Cover Records.

Death Is Not Glamorous links: Facebook|Bandcamp