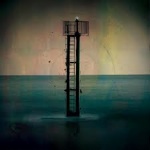 Side projects; they are the perfect way to allow musicians to express themselves in ways that they can’t with their main musical outputs. Whilst the world holds its breath for the brand new Brand Newnews since cancelling their European tour, drummer Brian Lane goes left field with Shone. This project has garnered a lot of promotion from the likes of Manchester Orchestra and Kevin Devine. However does it live up to it? Judging from this debut album, it is a mixed affair.

Taking cues from the post punk revival genre, Shone do things well and not so well here. Brian Lane’s vocals are of an idiosyncratic nature as they range from a deep monotone to higher pitches. Musically the band encompasses all the usual post punk intricacies, indie pop synths and guitars collaborate along industrial sounding percussion and bass. It shimmers, mumbles and clicks into place nicely, but into territory that is all too familiar. From here lies the problem; the music isn’t bad; it just doesn’t have anything to shout about. It can be quite forgettable to say the least.

For examples, one needs to take the magnifying glass and inspect the sweetly loose threading. Opening track ‘Piano Wire Number 12’ features Brandon Flowers-esque vocals and is very reminiscent of The Killers, whilst ‘Metal Bones’ takes strong electronic vibes from Radiohead. Both songs are enjoyable to say the least but sound too closely linked to the aforementioned bands. Indeed this is the problem, all the songs aren’t terrible, but they’re not good either. The bass driven ‘Slithering’, the unusual indie pop theatrics of ‘Baby Snakes’, and the jazzy ‘Defender 237’ are further references to behold on a wishy washy standpoint of opinion.

As a creative outlet, Shone is a wonderfully different beast to Lane’s main project. It acts as a nice tribunal to electronic/post punk influences it heralds but it fails to mould such sounds into its own identity and making. For what it’s worth, ‘Heat Thing’ by Shone is just a simple average filling to get you through procrastinative periods.

‘Heat Thing’ by Shone is released on the 26th August on Procrastinate Music Traitors.