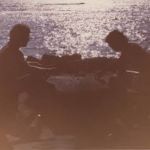 They say you shouldn’t judge a book by its cover and you probably shouldn’t judge an album by its title. However, with Seahaven’s latest effort, ‘Reverie Lagoon: Music For Escapism’, the Torrance, CA band are being blunt and direct, but don’t let that deter from listening to it, as the 14 songs on offer here take you on a gentle, compelling musical journey that leave a lasting impression.

Throughout the combination of the band’s blues-y, atmospheric approach and their sun-swept Southern California cool tone grabs a hold of you. Early highlights such as recent single ‘Silhouette (Latin Skin)’ are slow burning and delicate with sweeping strings that adds the band’s aching tone. Whilst ‘Wild West Selfishness’ is dominated by intricate, dizzying guitars that burst at the conclusion with vibrancy.

Admittedly fans who are more accustomed to Seahaven’s more indie rock/emo sound of previous releases may struggle to grasp an understanding of what ‘Reverie Lagoon’ is all about. Nevertheless, there are “rockier” moments; ‘Flesh’ has twisting guitars before hitting the chorus with a strong hook, which some may consider to “wake up” the record.

However it’s the band’s more dreamy, lighter approach that truly makes ‘Reverie Lagoon’ shine. Throughout, there are interludes that reverb and shimmer adding a comforting momentum to the record. Whilst the airy, acoustic ‘Highway Blues’ gives the band a sense of admirable coolness, something vocalist Kyle Soto continues throughout. On ‘Love To Burn’ his delivery comes as lazy and mumbled yet that’s a certain swagger in his voice that is simply ideal.

A later highlight is the stunning piano ballad ‘Solar Eclipse’ with its haunting keys and Soto’s sorrowing vocals, which are filled with guilt and passion. It’s a pure and beautiful combination that leaves you compelled and stunned.

On the whole ‘Reverie Lagoon’ can be taken two ways. It can be either seen as an accomplished, mesmerising record from a band that are moving away from their former indie rock/emo sound, or it can be seen as a dreary, self-absorbed record that on further listens seems a bit lifeless.

My initial reaction was the former. The band’s dream-y, atmospheric tone was a welcomed move away from the band’s “whiny” style I felt hindered 2011’s ‘Winter Forever’. However on further inspection, I get the feeling there are fewer standout moments than I first thought, with the band’s escapist approach simply adding coherence to the record.

Nevertheless I’m sure with the summer months approaching, I can see ‘Reverie Lagoon: Music For Escapism Only’ serving as my summer evening soundtrack. Whilst it maybe flawed for being somewhat one dimensional, Seahaven have certainly created a record that you can escape and get lost in.

‘Reverie Lagoon: Music for Escapism Only’ by Seahaven is released on 24th March on Run for Cover Records.