Album Review: Scouts – Why Do My Friends Have To Live Around Here 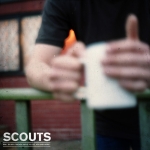 September 6th sees the release of North-West based melodic punk outfit Scouts ’ latest EP ‘Where Do My Friends Have To Live Around Here’ on Thanks For Nothing Records. The band features Me vs Hero’s Bobby Pook and claims to be his grittier, more serious side project. Scouts were greeted with a plethora of underground buzz after the release of their debut EP, and I was excited to find out if this new offering was just as good of an entry point as the last one claimed to be, as I’d personally never heard the band before.

The opener ‘Please Don’t Take Me Back To North Shore’ instantly has a huge The Movielife influence about it, the first 10 seconds more than the rest, but the track as a whole still carries a very heavy influence from Vinnie Caruana and his many musical projects over the years. That fact probably plays a large part in this song being my favourite from the EP. It’s catchy, the vocals are aggressive yet still sound easy on the ear and I can definitely imagine it being amazing live, which is always a plus with a pop-punk record. We then move on to ‘Every Day In Every Way’, which shows a more gruff punk vocal approach that separates it from the previous track. It’s the shortest song on the EP and holds more of a Daylight feel (‘Demo’ / ‘Sinking’-era), with the previously mentioned Vinnie Caruana footprint being virtually non-existent through this track. This one is made up of a much more simple formula than the opener; fast punk rock/pop punk with gruff vocals over the verses, a hard hitting bridge and a catchy chorus. Doesn’t hit the level of potential shown in ‘Please Don’t Take Me Back To North Shore’, but is still enjoyable none the less.

The last two tracks don’t really measure up to the first two at all in my opinion. While ‘Please Don’t Take Me Back To North Shore’ and ‘Every Day In Every Way’ are by no means outstanding and could definitely be improved upon on the band’s next release, once we pass the half way point of this EP it takes a turn for the worse and fails to gage my attention. It becomrs more apparent that this is a band whose members all have an array of different influences (all within punk rock but that is still quite a wide spectrum after all). I get the feeling that when it came to writing these songs all these different influences were filtered into different songs. I’m not necessarily saying that is a bad thing as with a longer release it might do nothing other than prove that they are a band who can successfully produce more than one style of music, however with just a short 4-track EP it unfortunately sounds more like a band who doesn’t know quite what they want to sound like yet, which leaves the EP feeling rather disjointed and unconnected as a full release.

Overall this EP in itself doesn’t stand out very much in terms of records I’ve listened to this year. It has, however, got me very interested in what Scouts have to offer in the future. Personally I feel that if they expand on the style that was previewed with ‘Please Don’t Take Me Back To North Shore’ then their next release could start to get them some attention. As for this current release, I think it will be lost on most fans of the genre due to the amount of other bands doing a similar thing who have already, right from the start, established what they want to sound like. Lastly, just to touch on the lyrical content, Bobby Pook explains in the press release that “the songs on this 7” are about the places we live and how we feel about them.”, so with all due respect they’re not exactly breaking any boundaries in that sense either.

’Why Do My Friends Have To Live Around Here’ by Scouts is released on 8th September on Thanks For Nothing Records.