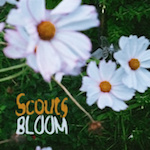 It doesn’t seem 5 minutes since North-West punk/hardcore band released their ‘Why Do My Friends Have To Live Around Here’ EP last September. Nevertheless, the quartet are clearly eager to follow it up and have done so with ‘Bloom’.

Whilst the band’s last release took an abrasive hardcore approach, on ‘Bloom’ Scouts opt for emo/grunge sound that could be compared to the likes of Basement and Title Fight. Opening with ‘Stay’, soaring guitars serve as the background to Bobby Pook’s aggressive-yet-melodic vocals. It’s a good but not great start, yet marks the transition from the band’s last release to ‘Bloom’.

‘Simmer’ sees the band somewhat dive head first into grunge mode with a swaying tempo, drifting guitars and bleak lyrics. Whilst it’s a style that’s not completely new, it somehow works for Scouts and as ‘Hourglass’ later on shows, they seem to have found their feet with this new approach.

‘Happy Campers’ is a brash, poppy number that sees them retain the grunge-y guitars and combines them with a loose, upbeat chorus. Whilst ‘Evelyn’ is a driving, melodic track that kicks off effectively, but unfortunately dies out as it goes along.

Whereas the band’s previous releases have struggled to solidify their identity, on ‘Bloom’, Scouts have taken a step in the right direction. Although it’s easy to compare them to more established acts, Scouts are merely trying to get themselves noticed which is something I think ‘Bloom’ has the potential to do. It’s an encouraging EP that has plenty of potential for repeated plays.

‘Bloom’ EP by Scouts is out now.