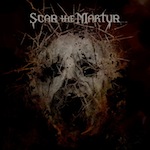 Looking back, supergroups have had a pretty spotty record for the most part. Some have gone down as being part of ‘the greats’, such as Cream or Journey; some maintain a cult following beyond their short years – i.e. The Postal Service and The Sound Of Animals Fighting; some immediately show themselves as being less than the sum of their parts (I’m looking at you, Axewound) and some just make one decent album and go on with their lives. That last category has more bands than is worth attempting to count. The thing to take from this is that putting a lot of successful and talented musicians together has little to no bearing on how good their output will be, it just means that plenty of people are already waiting to listen.

With that in mind, enter Scar The Martyr. This band is made up from (sometimes ex) members of Strapping Young Lad, Darkest Hour, Nine Inch Nails and most notably Slipknot’s Joey Jordison. They have an impressive CV between them but unfortunately this album doesn’t have much in the way of the elements that make each of the members’ bands notable.

In its approach, ‘Scar The Martyr’ broadly comes under what some would call ‘The New Wave Of American Heavy Metal’ – a term that is marginally more descriptive than just saying ‘heavy’ but it brings to mind bands like Trivium and Machine Head, to name a few. Other genres peek their head in occasionally; there is an undertone of nu-metal in the bouncing rhythms and a hint of industrial in the eerie atmospherics and electronic instrumentation, but generally it sounds like it would fill out Roadrunner Records’ checklist quite nicely.

While there are some good tracks on this album, the running time and track lengths are a considerable road block – both to finding them and to enjoying them without having to navigate to the next one. In other words, it’s a ‘skipper’. When an album is as long as this (75 minutes, 14 tracks and an average song length of around 6 minutes), that can cause problems. Unless simplified down-tuned riffs are your bread and butter then you may find that much of this album washes over without making much of an impression.

That said, some of the tracks on this release are worth taking the time to skip to. ‘Anatomy of Erinyes’ in particular boasts a chorus that channels the Deftones school of alt-metal without losing the band’s own flavour: the thick wall of sound in ¾ time and smooth vocals that alternate between subtle and striking leave enough space for both harsh growls and a spattering of electronic sounds here and there, as well as a faintly eastern vibe that brings to mind ‘Informal Gluttony’ by Between The Buried and Me in the use of percussion. ‘Cruel Ocean’ also brings a certain ‘guilty pleasure’ factor in its use of mainstream-oriented metalcore circa 2008 with a hint of synth. It almost functions as modern day cheese-metal in quite an enjoyable way.

In terms of instrumentation and production, this is a well made album. The guitars sound crisp, even when down-tuned to near-bass pitches, the drums cut and crack in the mix in most effective places and the vocals sound consistent. The performances are less impressive, with the guitars often settling for dull rhythm duties and Joey Jordison’s particularly impressive skills subdued to sound competent but without flourish, but they get the job done and by no means make for a poor sounding album in terms of performance and recording. Unfortunately, few ‘wows’ are found in such safe instrumentation.

In its simplest terms, this album is a collection of chunky, plodding down-tuned riffs and mid paced drum beats intersected with sung choruses that you could set your watch by. It works in the odd guitar solo here and there, the occasional atmospheric passage and a hint of electronic instrumentation, but for the most part the songs follow a relatively strict formula. This isn’t anything particularly unusual for an album that doesn’t dazzle, but when it runs on for 75 minutes and has an average song length approaching six minutes, it winds up tiresome at best.