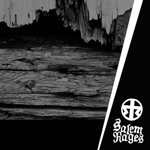 It seems fitting that Liverpool 4-piece and gloom punks Salem Rages release ‘Splinters’ – a compilation of self-released EPs the week after Halloween. With their recent signing to Visible Noise, and an album due for release next year, it’s a nice nod to their roots, with only one new track it’s a good way of looking back before moving forward. There’s a sense that there’s a real love of the occult and of the b-movie horrors that make film buffs happy at this time of the year in their music. yeah, things are a little bit cheesy and schlocky, but that’s really a thing that makes music like this work. There’s quite clearly a love of old school punk rock, and of bands like the Misfits, AFI, The Independents, and of the simplicity of 70s punk like The Cramps with some dashes of over dramatics.

The thing that Salem Rages have done with this cocktail is to try and strip it to the essentials and make it their own. There are still a lot of nods to their inspirations throughout. There’s a strong sense on tracks like ‘Black Rain Falls’, ‘The 7th Night’ and ‘Skulldaggery’ that Danzig era Misfits are a strong influence. While the vocals of singer Roman Remains aren’t quite there yet, the stories of tortured loves and the macabre are fairly well realised. The organ/keyboards added over the parts in ‘The 7th Night’ really affect that mood, with an air of Hammer horror, you could imagine Vincent Price in costume with that organ part playing in the background. The tolling bell in ‘Territorial’ is pulled from a gothic horror film as well, and against the marching rhythm that starts the song, the effect is pretty convincing.

There’s also a sense of drama with tracks like opener ‘Curtain Fall’, which feels like a hat tip to older AFI (of the ‘Black Sails in the Sunset’ era), which then doubles back into a driving, toe-tapping drum and guitar part, with a simple chorus with a call to arms of “crucify” being yelled. This is more straight down the line of punk rock, and I really enjoy it. ‘Casket’ is similarly stripped down Cramps-sounding punk, but that gothic edge remains while talking about death and “seasons missed”. ‘Black/White’ and ‘Skulldaggery’ both feel less overtly macabre, and more shouty angular punk, with a bif of a ramones and New York punk influence evident

My favourite track is actually the album’s closer ‘Love Is Alive’. This behemoth clocks in at just shy of 5 minutes, and is the longest track on the release, but offers a lot in terms of dynamics. The stop-start meandering feels very different to the earlier tracks and shows interesting progression. the breakdown lyrics of “you stole my heart // i took your life // into your chest // i stuck my knife” is melodramatic but to the point. It suits their sound down to the ground. The “love is alive, love is dead” chorus is singable (or howlable) and instantly memorable.

While the production isn’t perfect, this is a good compilation of tracks which probably wouldn’t be easily gotten on a physical format otherwise. there are a few tracks which don’t seem to be neccessary, ‘Black/White’ doesn’t do much for me, but for the most part those tracks feel as though they’ve been added for completeness. If you’re really wanting to keep the Halloween party going a bit longer, then this record would definitely suit your needs. If you’re ready to get the christmas tinsel out, you’re probably not the audience they’re looking for anyway.

‘Splinters’ by Salem Rages is out now on Visible Noise.