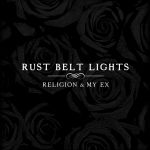 One of the biggest drawbacks of dating a musician is that on breaking up, you run the risk of having a song or two written about you. I feel a little sorry for whoever crossed Rust Belt Lights, as ‘Religion & My Ex’ boasts no less than ten tracks about a break-up, being left alone or being depressed. Yes, the bitterness is strong here, though fortunately it leads to some quite compelling music.

Sounding like a blend of Such Gold, Heartsounds and No Trigger, Rust Belt Lights have a fairly typical American punk sound, and this gives them an air of familiarity from the off.  This accessibility is definitely a plus point, and they’re just different enough to still be appealing in an over-saturated scene.

This is certainly a bitter album, and while at first the break-up lines are enjoyable, “forever became never suddenly” repeat listens reveal that every song takes a similar theme. Of course, this leads to the songs becoming a bit samey, and extended metaphors such as “the best thing about photographs is that they never change, even when the people in them pick up everything, drop me and move” make you wish they’d just let the subject drop. There are also quite a few heavy-handed seasonal metaphors here, but lines such as “you say nothing ever changes around here but the seasons changed and so do you” are no worse than something you might find in a Transit album.

So naturally, the best songs here are the ones that aren’t taking a crack shot at an ex. Both ‘Stay Young or Try Dying’ and ‘Parkside’ – songs about introspection, travel and lost youth are without a doubt the strongest ones here. Maybe it’s because they make a refreshing change for the rest, but these songs show that Rust Belt Lights have plenty of other topics to offer.

This isn’t a bad album by any stretch, but the endless break-up songs and heavy-handed imagery make it tiresome to listen to over and over. ‘Religion & My Ex’ is a once in a while album, not a stuck-on-repeat choice. Unless you’ve just had a rough break-up that is, then you’ll probably appreciate it more than me.

‘Religion & My Ex’ by Rust Belt Lights is released on March 24th via Disconnect, Disconnect Records.