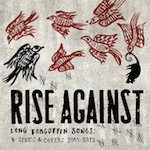 Rise Against could definitely be considered punk rock veterans at this point. With 6 studio albums and 14 years under their belts they have lasted longer than the vast majority of bands in their genre and, despite consistent criticism over their accessibility and mainstream appeal, have stuck to their guns in spirit and written songs about the aspects of society that concern them. At this point it seems natural that fans should get to see the ‘extras’ from the band’s back catalogue, and ‘Lost Forgotten Songs: B-Sides and Covers’ certainly delivers on that front. The 26 song, 80 minute album is quite a mammoth in terms of content but those who love the band already will undoubtedly find something, though likely not everything, to sink their teeth into and enjoy. Uninitiated listeners will definitely have a harder time enjoying this album, as with any album of its nature, but to its credit it boasts more in the way of A-Side worthy material than most B-Side compilations.

The majority of the early tracks on this compilation are fairly recent (sounding at least) B-sides that sound very typical of the band – octave and power chord guitar lines making up both the rhythm and lead sections, often held back in favour of singer Tim McIlrath’s low in pitch yet high soaring vocal melodies. Just as the band have become known for, these songs are punk rock dripping with pop sensibilities. “Woah-oh-oaaaah"s are always no further than around the corner, just as would be expected. These tracks fill up a decent amount of the tracklist and without being informed otherwise, you might not have guessed that they were offcuts from the band’s back catalogue.

As well as the B-Sides, this compilation also houses a substantial number of covers, with a wide array of sources. Both live and recorded, they come across with varying degrees of success, ranging from the earnest live tribute to Minor Threat’s self titled track and the novel and entertaining ’Making Christmas’ from the Nightmare Before Christmas soundtrack to the cheesy and ultimately pointless take on Journey’s ’Any Way You Want It’, but on the whole the covers feel like tacked on filler. A few are fine, perhaps 4 or 5 from a 13 year span, but in total there are 10. Yes, 10 covers that, for the most part, have no need to be on this album or any other, except maybe a fundraiser compilation with a few other bands. The inclusion of these tracks was a very poor choice on either the label or the band’s part (whoever decided) as it just leaves the second half of this collection feeling like a bloated dumping ground for a bunch of bafflingly superfluous tracks rather than a succinct record of this band’s best rarities. It is practically a certainty that all but the most dedicated fans would skip through the majority of these covers after the first listen.

Getting through all those covers is a souring experience to say the least, but the generally high quality of the b-sides dotted between them should be taken as reassurance that this album is worth investing in for active followers of Rise Against . However, the b-sides make no point of blowing the lid off what this band is capable of musically and won’t wow anyone who either aren’t fans or just plain aren’t interested. Despite the 26 songs here this album doesn’t offer much else. There is the acoustic ’Everchanging’ which is frankly boring, a set of safe and unchallenging chords set to vocals which, as a complete song, offer nothing in the way of intricacy or ingenuity, or ’Give It All’ which is without doubt the best track on the album, but having already been released as a single 9 years ago it’s hardly a b-side.

As a bottom line, this compilation effectively whittles down to a set of solid songs that are nice to see readily available, since they could have fit well enough onto their contemporary studio albums. Other than that, the majority of the rest is worth doing without; a nuisance to put up with for anyone who doesn’t have a compulsion to hear their favourite punk band cover a stadium rock track that they would never want to hear under any other circumstances. As has been stressed many times already, you probably won’t enjoy this album unless you really like Rise Against in the first place, and even so it may end up one of those frustrating albums where you find yourself skipping 10-15 minutes worth at a time to get to the good stuff.

’Long Forgotten Songs: B-Sides And Covers’ by Rise Against is available now on Interscope