Album Review: Rika – How To Draw a River, Step By Step 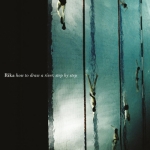 Rika are an Austrian band, singing in English, and sounding as though they were playing in Midwest America fifteen years ago. Frankly, it’s a winning combination. There’s a lot more to Rika than location and influence, however. ‘How to Draw a River, Step by Step’ sees the addition of a vast array of instrumentation that really adds something to the record as a whole. Tracks such as ‘October’ and ‘Retrospect’ make wonderful use of these, and help Rika make something truly special out of these ten tracks.

That’s not to say that the album would be nothing special without them, though. ‘How to Draw a River…’ is full to bursting with twinkly guitars and intelligent bass, ‘Ultramarine Blue’ alone offers proof of the talent behind the kit, whilst there isn’t a song of the ten that isn’t complemented by the absolutely magnificent vocals. Early on, they sound almost a lullaby, maddeningly soft and yet captivating at the same time. As they build with the record, which itself feels almost organic in its growth throughout, they join the rest of the band in brilliance at the climax heralded by ‘Departure’.

At times Rika surprise with the use of a little gain. Something that when thrown in with a cello, an organ, and even a horn or two – as these instruments themselves join this Austrian emo revival – might have seen everything get a little messy. But as ‘Port Dover’, ‘October’, and that fantastic closer ‘Departure’ will attest, it’s anything but.

With the backing of Count Your Lucky Stars Stateside and Goddamn putting the record out in their home country, it seems likely that we’ll be hearing more of Rika in the coming months. Listen to this record and listen to it in full, it’s beautiful.

‘How to Draw a River, Step by Step’ by Rika is available now on Count Your Lucky Stars in the US and Goddamn Records in Austria.