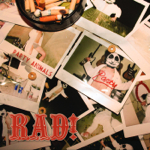 First off, I’m going to make it very clear that I have absolutely no idea what “party metal” is. It’s a genre that I’ve never heard of before, let alone listened to. But that shouldn’t put people off – instead, the stranger a genre, the more intrigued the listener and I was definitely intrigued upon listening to RAD!

Hailing from Los Angeles, RAD! have been bringing their “party metal” to their fans for a while now before releasing their EP ‘Party Animals’, containing a roaring six tracks. Short intro ‘From Which We Were Born’ ignites energy levels, before diving into ‘Balthazar’ – only a sweet three minutes long, an onslaught of blistering riffs explode upon the opening chords, blended with demonic drumming.

‘Party Animals’ is a solid bruiser of an EP, and a rather strong footing for RAD! It may not be everyone’s cup of tea, but you should definitely check them out if you have a soft spot for hardcore mixed with a real punk rock attitude.

‘Party Animals’ by RAD! is out now.