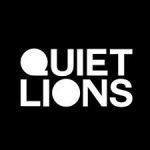 Young, promising and exciting British bands being snatched away from us has become all too familiar and the demise of Jumping Ships was just another dent in our hopes (though, cynicism aside, the sharper aficionados in our readership will no doubt agree that the prospects are more than healthy). Thankfully, three out of four of them now constitute, along with a new friend, Quiet Lions, an altogether more patient and atmospheric offering. In November, they release their debut EP ‘Surroundings’, a fairly strong introduction to a band who display a confident sound and evident talent.

Totalling 21 minutes and 6 tracks, ‘Surroundings’ represents a pretty healthy chunk of music this early on in a band’s chronology, which largely explains the presence of lackluster introduction ‘Demons’. Arguably, you might call it the first step in unpacking the band in that it displays many of the superficial elements of their sonic identity: emotionally-charged and melodic vocals, a taste for harmonies, a knack for atmospherics and a grand sense of scale. That being said these aspects are all condensed into a largely ineffective minute and a half. They’re put to much better use on ‘Just Deserve’, a swaying track that works in waves of various intensities. Harmonies, arpeggiated guitars, and effects fluctuate in influence to create an effortless flowing quality.

‘Are You Well’ cranks the power up a couple of notches. It’s slow, sparse start gradually builds up to mid-tempo croon, and then eventually fires up into a substantial rock track, crashing cymbals and grave fuzzed-out guitar chords included. There’s a cracking chorus in there as well and some understated, but nonetheless tasty, guitar licks working in the back. ‘Goodbye Ivory’ is perhaps the most immediately satisfying track on the EP, as well as the most deserving of the “beautiful” label. The soft tones of its delicate opening greatly help to amplify the light textures of the vocals, but the instruments swiftly devour all the space in a way that suggests that they must sound huge on stage. The band showcase a great mastery of rhythmic dynamics, knowing exactly when to crank it up and when to tone it down, never more than on ‘Goodbye Ivory’.

Quiet Lions put an end to proceedings with a ballad of sorts (the introduction of a more prominent piano is key to defining it as such) in the form of ‘City Beneath The Sea’. It has all the ingredients that work so well on the two previously mentioned tracks but the mix never quite reaches the same heights. It’s perfectly obvious from the clarity of their sound to the focus of their songwriting that the band are incredibly confident with their identity as a band and the sound they’ve settled on. The EP might’ve benefited from losing two tracks but it’s a laudable first impression nonetheless.

‘Surroundings’ by Quiet Lions is out now on Tabletalk Records.