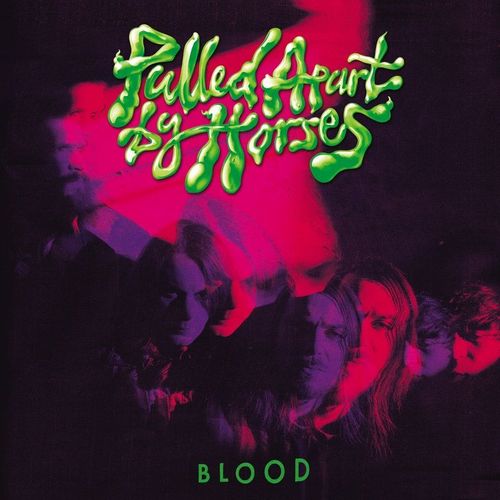 Pulled Apart By Horses are one of those rarest of entities – a band who have fought their way kicking and screaming from the depths of the unforgiving UK underground and into the mainstream consciousness.  From the pubs and basements of Leeds they have ascended to sold-out shows at London’s Electric Ballroom, tour supports for Biffy Clyro and Muse and most recently a main stage slot at Leeds and Reading Festival.

This, their third full length, very much encompasses such a transition as it feels like the creation of a band who are the finished article. It takes its cues from acts that would only be seen on the big stages, and this in itself is indicative of the aspirations of these four lads from humble beginnings. The chaos that has always been at the heart of their sound remains, but it is married with a maturity and confidence that is ready and raring to take on the larger crowds.

The album launches with ‘Hot Squash’ and it’s furious rock n’ roll groove. It has this slightly unhinged, almost psychedelic feel to it and they aren’t afraid to really jam out towards the end, reflecting the essence of their live show on the recording. ‘Blood’ is very much its own album and isn’t the slightest bit interested in conforming to the structures of the punk and hardcore blueprint from the scene in which they made their name.

First single ‘Lizard Baby’ has got this big, crunchy and very Brit chorus that is full of deviant grunge spirit. It sounds something like Supergrass meets Nirvana, which is the kind of sound the world needs a hell of a lot more of. ‘You Want It’ meanwhile is just a straight out big dirty and sleazy rock anthem; blunt, memorable, unashamed and fantastic.

The band’s roots are never forgotten but carried with them into new and unknown territories. The whirlwinding maelstrom that is ‘Bag of Snakes’ would stir up a circle pit in the dingiest of punk venues, but sounds big enough to go down equally well if they were to perform on the Pyramid Stage at Glastonbury (an occurrence that probably isn’t too far away).

‘Medium Rare’ channels Queens of the Stone Age with its stomping guitar riffs and at first plaintive and then scorching vocals (the band paid homage to Josh Homme during their Reading Festival set), whilst epic closer ‘Golden Monument’ is all Smashing Pumpkins; big crashing riffs and just generally huge sounding.

In the six years in which they’ve been around, Pulled Apart By Horses have not compromised one single iota, living every bit of the rock and roll lifestyle with their self-endangering live performances and love of excess, but at the same time working their arses off and giving everything they’ve got to the cause. They were always going to write a really big album one day, and this is it.

‘Blood’ by Pulled Apart by Horses is out now on Sony RED.