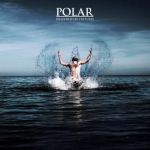 Someone should probably point out to Polar that hardcore punk really isn’t supposed to make you grin like a crazed idiot. But that is the most hard hitting effect of the Surrey four piece’s sophomore album ‘Shadowed By Vultures’.

From the instant that opener ‘First Breath’ kicks in, the whole thing barrels uncontrollably along with a raging unpredictable swagger that simply can’t be ignored. As riffs begin to assault the senses from all directions, it quickly becomes clear it’s best to just let go and enjoy the wild ride.

There are signs that time spent on the road alongside acts like While She Sleeps and Young Guns has given Polar a new found ability to craft genuine anthems, while losing nothing of the visceral heaviness that brought them to prominence in the first place. The best example of this being the album’s lead single ‘Glass Cutter’.

’Shadowed By Vultures’’ stand out moment comes in the form of ‘Black Days’. A truly massive, catchy as hell tune oozing beery bonhomie and sounding like the sort of riotous Jager soaked party that you definitely wouldn’t remember in the morning…well apart from the bruises anyway.

An eventual chance to briefly draw breath comes in the form of ‘Before The Storm’, a slower paced, unexpectedly delicate and slow-burning number that appears slightly out of left field before exploding into a soaring chorus. The female lead vocal part can’t help but create the image of Hayley Williams covering Young Guns ‘Winter’s Kiss’ to cracking effect.

There’s more epic, hearing assaulting riffery running the show on the title track as the guitars square up for a titanic battle for attention with Adam Woodford’s snarling vocals throughout.

Normally with a great record the line “not to be missed or ignored” is pedalled out. In the case of ‘Shadowed By Vultures’, Polar have created an album with so much fire and energy, fuelling brutal attention grabbing anthems that it would probably come round to your house and kick your door in if you even tried to escape it.

’Shadowed By Vultures’ by Polar is out on the 10th February on In At The Deep End Records.