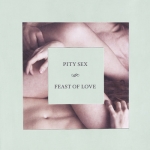 Some bands have gotten by over the years despite their terrible name; Biffy Clyro and Smashing Pumpkins being two off the top of my head. Pity Sex, a quartet from Ann Arbor in Michigan, boast a horrific name, but look past the handle and you’ll discover some quite lovely music. Some of their RFC labelmates have incorporated shoegaze into their sound, but this four-piece have brought the late 80’s/early 90’s crux of bands like My Bloody Valentine, Slowdive and Ride kicking and screaming into the 2010s. ‘Feast Of Love’ immerses the listener in layers of hazy feedback, warm, melodic tones and a dual boy/girl vocal approach that makes this an experience like swimming through honey.

Opener ’Wind-Up’ sets the course for this full-length, crashing in with a driving, coruscating riff that does not compromise through its relentless course. Brennan Greaves and Britty Drake’s vocal interplay is wonderful on tracks like ‘Keep’; imagine Lemuria, but if they were slower than molasses in January, or Sonic Youth’s Thurston Moore guesting on a Breeders record; Drake’s vocal is far more Kim Deal than Kim Gordon. This album ebbs and flows naturally; the aural equivalent of lying on a beach on a hot day with the waves lapping at your feet.

The production values, unfortunately, do not allow this to be a completely enjoyable encounter; it feels far too compressed, and as a result, what should sound razor-sharp at times feels blunted, such as on ‘Smoke Screen’. The album starts to sag slightly in its mid-section, the energy levels sapped away by more mediocre material; luckily, ‘Honey Pot’ revives the album to its zenith, despite disappointingly being curtailed before it really gets going. ‘Feast Of Love’ powers on towards its close with the fantastic ‘Fold’, an emphatic slow-burner encompassing all that makes this record great.

Run For Cover have frequently knocked it out of the proverbial park this year with excellent releases from Daylight, Modern Baseball and Citizen among others, and Pity Sex’s debut full-length may just prove to be the valedictorian of the RFC Class Of 2013. Pity Sex’s summer US tour with Dads and The World Is A Really Long Name represents just three of the bands at the vanguard of the emoindiepunkwhatever scene, and, alongside bands like Title Fight, may have just made shoegazing cool again. Now, where did I put that Chapterhouse record…

‘Feast Of Love’ by Pity Sex is available now on Run For Cover Records.