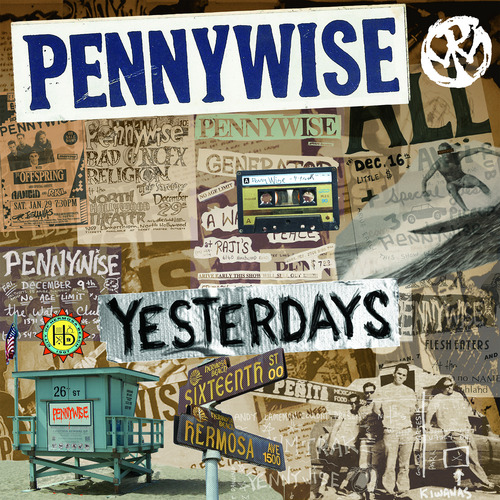 US punk quartet Pennywise have now released in total eleven studio albums in total. Rather than pushing even further for newer sounds, Pennywise have returned to their popular early sound with their latest release ‘Yesterdays’. Who can blame them? Don’t fix it if it isn’t broken? However, don’t be fooled as ‘Yesterdays’ is not simply copying the old sound, as Pennywise has kept the sound fresh and attractive.

With the return of Jim Lindberg, Pennywise has regained its original vocalist. This brings a lot more familiarity compared to the 2012 release ‘All Or Nothing’ with vocalist Zoli Téglás. Not only have they retained those original vocals but several of the tracks were the original writings of deceased bass player Jason Thirsk from the late 80’s before his death in 1996. Lindberg had always intended to record these tracks that they had stored away until they felt more “life-affirming”. This rings true with the album touching on emotional subjects at the time such as ‘I Can Remember’, reflecting on the death of Thirsk, differing from the typical political stance of their lyrics.

The album opens with ‘What You Deserve’, immediately telling you what this album is all about. It’s bass riff and sloppy guitar stabs roll in to that classic punk rhythm that harks back to their roots. This is accompanied by the politically charged lyrics around the subject of police brutality and corruption; Lindberg sums this up at the end of the track with the frequent repetition of “can’t trust that policeman no more”.

‘Violence Neverending’ continues the same sceptical political stance. The powerful introduction and chorus makes great contrast to the minimalist verse, however this change in texture does not affect the sheer pace of the track. The influence of bands such as Bad Religion and their work with Brett Gurewitz of Bad Religion and Epitaph is clearly evident with tracks like this. To record ‘Yesterdays’, Pennywise returned to their hometown of Hermosa Beach, California and recorded the album in a factory district to give it that “original spirit” that had initially supported their success. Each track was also done in two takes to give it a very raw punk feeling and this can certainly be heard on tracks with the rough guitar work.

‘Yesterdays’ is a very strong release from a band with a career spanning 26 years. The sound retains its old school feel whilst also injecting it with new life, giving Pennywise a new platform to continue. The tracks varied subject matter increases it’s accessibility to an audience who had previously been bombarded with political tracks that Lindberg admitted “may have been turned off”. This album certainly is one for both the long time Pennywise fans and those that may have only just discovered them. This band certainly shows no signs of slowing with them joining Rise Against on their European tour in November.

‘Yesterdays’ by Pennywise is out now on Epitaph Records.