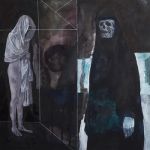 A love affair between two of the UK’s greatest bands in hardcore right now, Pariso and Svalbard, has resulted in this, a collaborative split LP of epic proportions. Hold that thought for a second…not a split EP, but a COLLABORATIVE SPLIT LP! This offspring of their relationship combines all their talents, ideas and efforts to make a record with the best DNA possible. As well as individual tracks from both bands, this album (yes, this is an album) features two collaborative songs. Both showcase how smoothly this pairing is.

To divulge into what is so great about this record, let’s analyse the songs themselves, starting with the Pariso side. On last year’s surprise album, ‘Consanguinity’, the London noise makers maximised the scope, ambition and scale of their well calculated math driven ferocity. Here, the band takes a logical next step from the ideas set on that album. Pariso successfully master those tested ideas in a confident manner. Both ‘Underground Notes’ and ‘Delirium’, for instance, retain the same terrifying mathcore speed of their early work, whilst sounding absolutely massive. Sandwiched between speed metal like pummeling is a chugging heaviness, which lends itself to a lingering dissonance. Such points allow Pariso to reach Godzilla sized proportions. The highlighted contribution from this band however comes in the form of ‘Helios, The Demise’. Pariso are certainly taking cues from 90s legends Kyuss and Soundgarden on this behemoth. When listening to this beauty, you feel as though you are walking through the Sahara; blistered and dehydrated, yet in sensual awe of what’s around you. The guitars, drums and bass swirl in psychedelica and stoner rock influences that are so mouth-watering you can actually taste it. In addition to this, the raw throated yells by Mario Gambardella integrates the quintet’s hardcore aspect, enabling them to invent a genre all of their own making.

Whereas Pariso have a rather large discography at this point in their career, including two albums, Bristol’s Svalbard have only released a few EPs to their name. In one way this LP could be considered as a semi-debut full length of sorts for the band, whether they consider this is another matter entirely. But let us not linger on that, how do their songs fit in with this record? I for one can assure you that Svalbard’s material is of an equal measure in quality to the output by their London peers. The Svalbard formula combines melodic hardcore, post rock, crust beats and stoner metal in a daring fashion. It is so daring in fact that they have become one of the freshest sounding bands in heavy music. Like Pariso, lessons in their early recordings have been learned from, while ideas are ramped up to magnificent heights. ‘Grayscale’ is uplifting as it is biting. The track’s foundation is emotionally poignant through ambient melodies, with a rumbling core, brooding in heaviness. The tempo shifts from fast to mid tempo in the most dynamic, seizure like way possible. Eventually it rolls over the mountain it has climbed into a peaceful lull of metallic post rock led brilliance. Following song ‘Allure’, an apt name, awakens from that slumber into a dawning, dissonant haze of hardcore screams. The slow build up crashes out of the shadows into the depressive daylight; it leads to a beautiful, but almighty finish.

Although both bands strongly deliver with their own songs, it is the collaborative numbers which truly capture what this record is all about. Album opener ‘Floating Anchors’ steamrolls buildings, bringing colourful riffs along with it as Svalbard co-vocalist Serena Cherry takes the lead, with Gambardella and fellow Svalbard member Liam Phelan tagging along, bouncing along the rage. The other collaborative effort and album closer ‘Faceless’ sees the Pariso vocalist take charge; a hectic juggernaut not for the faint hearted. These numbers don’t just indicate how well this co-operation works, but excellently defines the meaning of the word ‘collaborative’. For you see, a split record usually indicates two opposing entities on a coin, whilst a collaborative combines these entities, the bands, into a unified outfit. Both Svalbard and Pariso don’t just do this via these songs, but also through interlinking lyrical themes and by maintaining a consistent flow throughout the album. In regards to lyrical themes, both bands are exploring people and emotions in our grey lives, going over how these forces have affected us. In other words, withdrawing the poison and finding a cure which will ease such negative processes, leading towards a stable, hopeful state of mind. The fact Svalbard and Pariso make this work in a well-oiled manner lives up to the phrase that “great minds think alike”, thus they can utilise their ideas and produce something as great as this.

What we have here is an incredible record, showcasing the growth of two of the best British bands in the UK heavy music scene. Both aim high with all manner of ambition, treating their ideas with the right attitude and respect necessary. Thus Pariso and Svalbard have successfully created the perfect collaborative record, not just in musical terms, but also lyrical. This split LP showcases both outfits at the heights of their evolutionary journey in music and they’ll continue to impress beyond that. Here’s to hoping this isn’t swept under the rug by the majority because it would be a damn shame if so.

‘Collaborative Split LP’ by Pariso and Svalbard is released on the 7th July on Tangled Talk Records.