Album Review: One Hundred Year Ocean – Where Were You When We Were Getting High? EP 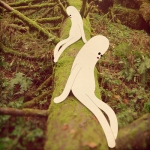 Not content to have already released one eye-catching album this year as part of the bright, upcoming emo outfit named The World Is A Beautiful Place & I Am No Longer Afraid To Die, guitarist and vocalist Derrick Shanholtzer also happens to release his solo material under the less-alienating moniker One Hundred Year Ocean (lack of basic understanding of oceanography notwithstanding). With the former, Shanholtzer and his comrades have built an impressive form of expansive emo, blending the openendedness of post-rock with the reassuring lyrical angst of the genre. Whereas TWIABP often manages to be beautiful, the new One Hundred Year Ocean EP; ‘Where Were You When We Were Getting High?’ delivers its variety of ideas with gritty sound and intimacy, and simply demands a dispelling of comparisons to TWIABP, thus invalidating the rest of my introduction. Read it, then, as a cautionary tale.

If were are willing to ignore how much a given person must admire Oasis to actually name an EP after one of their lyrics, One Hundred Year Ocean actually has a fair bit to offer and, over the course of the EP’s four tracks, seldom recycles its own ideas. ‘Hospital Town’ gradually builds from its opening clean slo-mo guitars to a restrained climax, wrapping Shanholtzer’s blasé tones in softness that turns to measured grandeur. His oft-repeated line “I hope there is a hell for you” thus benefits from feeling different on either side of the shift. ‘Soco Amaretto Bud Light Time’ transitions effortlessly from energetic sections to delicate passages with ease, with crunchy guitar scratching one minute and larghetto clean licks the other, Shanholtzer’s passionate delivery ever-present. The track twists and turns, perhaps desperately trying to avoid the risk of resorting to tropes, going so far as to unleash a surprisingly effective trumpet finale.

&amp;amp;lt;a href=“http://onehundredyearocean.bandcamp.com/album/where-were-you-while-we-were-getting-high” data-mce-href=“http://onehundredyearocean.bandcamp.com/album/where-were-you-while-we-were-getting-high”&amp;amp;gt;Where Were You While We Were Getting High? by One Hundred Year Ocean&amp;amp;lt;/a&amp;amp;gt;

Trumpet has a history of marrying well to emotional tracks with twinkle-toned guitars (think This Town Needs Guns’ Elk, and the work of Danish outfit Mimas), and commands an important role in the minute-long ‘Apples’. With ever-so-slight hints of the more dynamic horn range of ska, the track’s heavier yet leaner approach finds its hook in the trumpet melodies and a strange anecdote about drinking one’s own urine. Finally, ‘Magnetic Curses’combines nod-inducing guitar work, the dulcet tones of the solitary trumpet, and softly-harmonized self-hating lyrics to beautiful effect. As the instrumentals suddenly crescendo, accompanied by Shanholtzer’s pained wail, this reviewer is reminded of how few second-wave emo bands manage to muster the emotional intensity of their influences, in a way that One Hundred Year Ocean quite clearly can.

Revival genres are about re-igniting the sentiment of bygone eras without tying its authenticity to a particular set of stylistic codes. As such, One Hundred Year Ocean’s ‘Where Were You When We Were Getting High?’ is an example of how to accomplish that exactly right. Crunchy in parts, intricately delicate in others, mixing melancholia and angst-ridden themes without falling into pathos, Shanholtzer successfully channels the soul of emo through a confidently varied indie exterior. Also, trumpets.

‘Where Were You When We Were Getting High?’ EP by One Hundred Year Ocean is available now on Bandcamp and will be released on vinyl soon through Broken World Media.