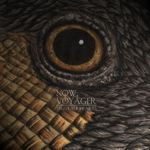 Self-professed Belgium’s finest melodic mathcore quintet Now, Voyager are releasing their second EP ‘Tell-Tale Hearts’. This four track record is a bit hit-and-miss as the introductory track is simply weak, and the band is unrecognisable in the final closing which is a breathtaking musical spectacular.

The EP begins with ‘From The Brain’ which is a poor choice for an opening first track, it fails to keep your attention and your left wondering where is this track going? It starts with brutal hard-core sounds with a deep beat, heavy drums and electrifying riffs. The vocals are fierce hard-hitting screams, and musical melodies are mixed with electronic symphonies.

This follows with ‘Where We’ll Start’ which is a huge improvement to the first track, it’s furious, catchy and completely captivating. It’s a racing brutal metal triumphant, featuring excellent musical talent and has a sing-along chorus. The song features a vicious breakdown, with more superb horrifying screams and powerful drums.

‘The Lona Lane’ begins with melodic sweet playful piano sounds and is unlike the previous two hits. It progresses into a slow soft sing-along song that smashes into a hard-hitting metal instrumental. Instead of the usual brutal screaming, we are introduced to wonderful harmonious vocals. The song still holds that rocky edge and finishes with a beautiful instrumental.

The stand-out track is ‘To The Heart’ which has a similar opening as the previous hit with twinkling playful sounds. It has an upbeat style and an ambient melody with a rock feel rather than the ferocious heavy metal style in the first two tracks, and is a much needed softer approach from the intensity of the former tunes. This song is emotional and sweetly mesmerising, which then breaks into powerful screams and has a wonderful captivating melody, it also stars prevailing backing vocals to top the fantastic musical talent.

Now, Voyager manages to showcase their superb talent in the final hit, but fails to hit the mark in the other tracks. As the EP progresses, the songs become more sophisticated and intricate, and finishes on a high note. The band clearly has talent but this EP fails to truly convey the depth of that ability. The vicious hits are adequate but nothing special; however the softer rock tunes definitely have that unique flair which makes them exceptional.

‘Tell-Tale Hearts’ by Now, Voyager is available on the 19th August from Destroy Everything.