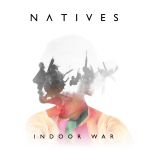 For a record to be considered properly great it needs everything to fall perfectly in to place on a variety of levels. For the New Forest’s Natives, the first incidence of this was exactly the right producer in John Feldmann (The Used, Panic At The Disco) approaching them through the wonders of Twitter and offering to take the helm for the recording of their debut long player.

This resulted in the band making the trip from the South Coast to the sunnier climes of LA to link up with Feldmann and Brandon Paddock. The two men then began the task of helping Natives develop a sizeable cache of demos and musical ideas into something really quite spectacular, ‘Indoor War’.

Normally it takes young bands an album or two to build the confidence, know-how and experience to aim for an album quite as ambitious as this. Somehow Natives have managed to pull off the tricky to master combination of an expansive and intricately layered sound palate, an even more intricately woven set of lyrical and emotional themes that borders on a concept record; all while giving every track a punch packing and instantly accessible melodic hook.

Natives clearly know how to play to their strengths, and ‘Indoor War’ features the best aspects of their pop and rock tendencies, razor sharp angular guitar riffs nestle alongside haunting key sections, huge synth fills and even some tribal style drums. Just the right of post-production sheen has also been added that further accentuates the impression of the songs sense of vitality and occasion.

Vocally things are as syrupy sweet as you would expect, all the big notes are effortlessly hit without sounding so polished that it sounds auto-tuned. Well placed gang vocal sections also give some of the choruses an extra punch and shot of energy.

On the lyrical front, Natives challenged themselves by choosing to tell the story of a character rocked by loss and attempting to live in an entirely logical and emotion free way. This theme is carried through the first half of the album, but fear not, due to the sheer vibrancy of the music even the most introverted and analytical tracks still manage to feel uplifting. At around track six or seven, the character cracks and embraces emotion and love and all its highs and lows, from this point on ‘Indoor War’ ramps up the exuberance and feel good factor even further.

Indoor War’ by Natives is released on 17th March on Transmission Recordings.