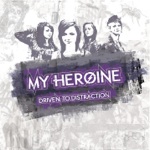 Its pretty obvious that the rock music scene is dominated by male musicians, and with Paramore being the leading female fronted rock band in the world, every female rock vocalist will be compared or associated with them. So to be an all female band, from Essex  (where culture seems to have taken a nosedive straight into the pavement) it must be pretty hard to be taken seriously. So, with that in mind, I went in with a very optimistic view/ear.

‘Be With Me’ is the first song of the EP, and it shows that the girls can really produce a good, full, rock sound, without the need of harsher vocals. It’s refreshing to hear a female vocalist singing proper rock music, and not trying to emulate the Hayley Williams pop-punk style. Trying not to compare to other female fronted, or all female membered bands, I hear a resemblance to Evarose; not a bad thing though! Evarose are making a name for themselves in all the right ways. A catchy chorus, and a strong sound throughout proves that My Heroine definitely know what they’re doing. I almost don’t want to say it, mainly because I want these guys to prove everyone wrong, but I can’t help but find some of the elements quite cliché; certain “woahs” and other backing vocals are very overdone in music.

The second track of the EP, ‘Spit it Out’ shows the true strength of the lead singers vocals – she certainly knows how to sing. Another strong chorus, with complimenting vocal lines. All in all, this is probably my least favourite song of the EP, it doesn’t really go anywhere (it has a great chorus, but it does nothing for the song) and it just doesn’t really stand out.

‘Breathe’ starts off with just a guitar and singing, and I got worried it was going to be quite a bland, boring song. Luckily it’s just the intro, and the band come straight in. As the chorus comes in, I’m getting more impressed by these guys; such a strong sounding chorus, nothing cliché here. The strings in this song are quite subtle, but add to it very nicely. My Heroine’s real strengths shine through in this song.

Another stereotypical rock song, ‘Show And Tell’ doesn’t really stand out. The guitar solo is a nice surprise, another strength of the band, although the song still doesn’t really do anything for me.

Closing the EP, somewhat ironically named ‘I’ll Be Your Heroine’, is probably going to become something of an anthem for the band – some great, but almost cheesy lyrics, are sure to be sang back to them at gigs, and with such a catchy chorus, you can’t really doubt the power it will have live.

My Heroine are certain to prove critics wrong, whether they’re audiences or literary critics. They have the musical, instrumental and songwriting ability, to gain them the fans and appreciation necessary for a female band, and they can certainly write a good song. The clichés are sometimes in abundance, but the strength’s shining through in other parts overshadow them and show their potential. They also prove that there’s more to Essex than the vile personalities and influence from The Only Way is Essex. There is much more.

‘Driven To Distraction’ by My Heroine is out now.