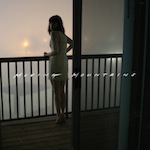 The third album from New York foursome Moving Mountains is phenomenal. Nothing short. This self-titled release is a near perfect example of heart breaking brilliance put down on tape (or put down as digital files – ‘tape’ sounds nicer). From the off, as ‘Swing Set’ arrives through the feedback this is just a lovely album. Always building to an emotional climax that I feel most should never reach. Later, as ‘Hudson’ makes its way towards its conclusion I am simply awed that this record exists, that there are people who haven’t heard it yet, and I feel for those people who may never hear it.

From ‘Hudson’, ‘Moving Mountains’ continues on through three more gorgeous scenes until, still as sublime as his vocals were at the beginning, Gregory Dunn at last gives way to one final drum beat before ‘Moving Mountains’ succumbs altogether. With it, seemingly, the band themselves have gone – having since announced their indefinite hiatus.

I could sit and write thousands of words about this record but in the end I’d only be taking time away from you hearing it in full. Somewhere between Elliott Smith and Jesse Lacey lie Moving Mountains – devastating and yet eternally uplifting. Perhaps because for every shitty thing you’ve ever felt, there’s this record.