Album Review: More Than Life – What’s Left of Me 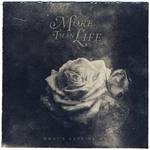 Five years ago in this reviewer’s household, no EP had been spun nearly as much as Defeater’s ’Lost Ground’ EP. There was a band who truly seemed to reinvigorate the term emotional hardcore. Their stories might be figments of their imagination, but its distinctive delivery – a voice persistently haunted by agonizing pain – ensured the effect was never anything but poignant (at best downright heart-wrenching). Many of us, I’m sure, have finally started to come to terms with the fact that Defeater are unlikely to ever reach those heights again, as evidenced by their positively average ’Letters Home’. If this reviewer’s mourning process has eased a little, it’s most certainly in part due to the handful of talented bands who have proved themselves capable and willing to carry the torch. One such band is More Than Life, who have surely released their finest effort yet with second LP ’What’s Left Of Me’.

Of course, it’s not entirely fair to mindlessly lump them in together, but when those similarities do rise to the surface, for the most part they reflect well on UK outfit. More Than Life are perhaps less interested in the texture and tone of their instruments than Defeater are, but they bear an almost parallel balance of aggression and melody, as well as a comparable outlook on life (though More Than Life do betray a hopeful streak here). Perhaps the best summary of what this band are about, ’Weight Of The World’, is on one hand hand strongly riff-centric, but it’s almost always accompanied by contrapuntal, reverb-heavy, melodic background guitarwork. The track’s penultimate section is an engrossing mixture of passionate vocal work, heavy riffs and delicate melodies, the first of several instances of the band acing bridges, middle-eights and pre-finales.

Unsurprisingly, More Than Life work best when they stick to that formula, as is the case on ’What’s Left Of Me’ and ’Seasons Change’, though both those examples allow more time for slower, more introspective, moments than ’Weight Of The World’. However, the band aren’t averse to mixing things up a little, a laudable endeavour that yields uneven results here. When they go full hardcore, as they do on ’You’re Not Alone’, everything that sets them apart is put aside, and the track rushes headlong into forgettable territory. On the other hand, the slow-burn method of ’Threshold’ provides a strong platform for the band to go full emotion, and they make the most of that opportunity with an affecting (if slight) track that picks up, climaxes and finally soothes the sore with some strings.

More Than Life have a lot of things going for them, not least of them a Defeater lull to take advantage of. ’What’s Left Of Me’ reveals a band full of desire, and intent on proving their versatility (a useful distinctive feature in a genre long contaminated with stagnation). Evident is their skill at delivering emotional material, though there’s still a way to go before they reach the point where every line sinks straight into the heart (‘sup Pianos Become The Teeth). What seems evident to this reviewer is that we, perhaps finally, have a decent UK contender for the emotional-hardcore throne. For now, let them enjoy princely leisures, and we can only hope next time we will find them only stronger and ready to quit eyeing the throne, and properly have a stab at sitting their plump buttocks on it.

‘What’s Left Of Me’/em> by More Than Life is out now on Holy Roar.