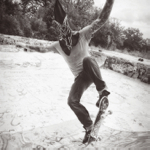 Bipolarity is currently a huge hit in the punk arena. Gone is the golden era of hardcore bands thrashing their way through songs like raging bulls. Simplistic approaches, while still perfectly valid, have gradually been eclipsed from the throne by bands willing to experiment with pluralism. A gruff core might be lined with delicate sections, abrasiveness is almost always followed by melody, careening heavy tracks find sophistication in progressive exploration, etc. It’s only the most natural of evolutions (think of how the prog-heavy 70s followed the rather unadventurous end of the 50s and 60s era of rock’n’roll), and as far as the present writer is concerned, it is most welcome. There’s always the off chance that a failed experiment could still prove an interesting venture, and the successful ones are often those that shape of things to come (relevant reference there). MINE, then, effortlessly slot themselves into the popular contemporary strand of hardcore that prefers its whiskey in a cocktail rather than straight.

The first ingredient, and the first served on second EP ‘Disappear’, is a swirling, somewhat hypnotic, brand of melodic guitar. Delivered with a resonating reverb at the start of opening track ‘Stand Up’, its soft licks entice with their melodic rêverie eerily echoing in space. Soon enough, though, the calm makes way for the storm. The vocals tear through the now-distorted melody, the drums transitioning from minimal snares to a military beat, providing the backbone for the guitars to abruptly emerge from their subdued, effected, daydream into a clatter of noise. Channelling contemplation as well as ‘the mosh factor’, ‘Stand Up’ is the perfect business card in that is succinctly communicates everything you need to know about this band. Tactics are altered somewhat for promotional single ‘Penknife’, cautious openings are substituted for electrical immediacy and power. The heavy groove of its battering-ram opening devolves into a minimal verse, solitary snare beats and a clean guitar providing the support for the despair/rage combo of the vocals. There’s certainly less understated beauty involved, but they make up for it with a commitment to offering a diverse listen: back and forth shifts between soft and loud, a Led Zeppelin-esque background noise section and an unwavering fury.

MINE even find space for a languid instrumental track that’s all atmosphere and effect pedals. It’s unlikely to become anybody’s favourite but its build and release structure serves as a prelude to closing track ‘Sleep Walk’, one which follows that exact same pattern. The song builds on a simple ‘one note at a time’ guitar, gradually adding the ever-sharp vocals, driving beat, a filthy-dirty bass line until it inevitably reaches breaking point. The accumulation climaxes early, around the 2-minute mark with a bluesy-grooved outburst and a powerhouse rhythmic finale. When it finally releases, we’re left with a sense of relief, certainly, but it’s the same kind of relief that you experience at the end of a thrilling fairground ride; it’s swiftly replaced by a desire to go again.

Hardcore… make sure you accommodate MINE at the table, because they’re making sure you stay fresh.

‘Disappear’ by MINE is out on the 30th of September on Holy Roar Records.