Album Review: Manhattan Coast – This One’s for You 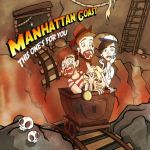 Manhattan Coast are adding themselves to an ever expanding list of talented bands emerging from South Wales with their latest EP offering ‘This One’s for You’, throwing catchy riffs and clever words across speakers and headphones all over. They’ve supported the likes of Kids in Glass Houses and Blitz Kids, and head out on their first European tour this month, followed by UK dates in late February. That said, lets get stuck into the tracks…

’War on the Weekend’ opens the EP with a thick pacey guitar line before the rest of the band add some rough sonic layers and beef the track out. There is absolutely no denying the fact that these boys can thump out a catchy tune (as the rest of the release goes to show) and this drives the EP out of the stocks and into your face. An uplifting, euphoric chorus cleverly underwritten with some clever guitarwork underneath it keeps your ear in and gets you hooked.

Up next is ‘Monsoon Season in Machine City’ which again opens with a guitar riff and drums before the rest of the band kick in and pull the track together. The melody and rhythm work here is a step up from the opener, trading off against one another and countering much more. Unfortunately, the bass seems to have suffered in the mix a little here (and on a few other tracks) and it loses a lot of its punch and attack and becomes more of a rhythm guitar tone which in some instances works, but in others the song misses that thwack a full on bass offers where the bass has been driven too hard and becomes lost. However, all of that wonderful catchiness, which the boys are reputed for, is dripping from this track, and it stands its own on the EP.

Title track ’This One’s for You’ employs more counter melodies between the guitars and bass for the verse and keeps your attention well into the bridge and chorus which sound thick and luscious, more so than the previous tracks. It would be nice for the lead guitar work to have been brought up in the mix a little, but then again this way it doesn’t distract too much. Unfortunately the middle break down of the song has suffered hard in the mix, with all of the air suddenly sucked out of the song and you can head the bass compressors shutting the door on most of the mix when the volume spikes on the low end. Certainly the most individual track on the release.

’Dreams are for the Dreamers’. Hand claps and chanting. It’s a classic start to a track! More catchy riffs and solid vocal work in this track, however it’s starting to get a little repetitive now across the EP. Which is a shame, because once again this track, and the rest, demonstrate how effective a catchy riff and a solid rhythm section are, and the fact is that this band are nailing that formula with each track. But, no matter how catchy a track is, you still need a hook to keep it different.

’Carpe Diem’ rides the EP out with a bit more balls than the previous tracks with more of a hard rock style thrown into the catchy riff formula that’s made this release work. It’s nice to hear a track that sits outside the box a little, especially leading it out. The catchy riffs are still there as are the consistent, punchy lead vocals, but the guitar and bass are together and thicker and adding loads of low end. However, the breakdown once again lets this track down with the vocals dropping back and the mix muddying up a little and when the bass tries to punch you in the chops with a few low end haymakers the compressors start working and push it down and kill a little of the attack it should have. But there’s a previously unseen aggression to this track and I’ve got to say I like it. There’s some more urgency, the track sounds fuller and thicker and a bit of screaming always goes down well in my book.

All in all Manhattan Coast have unleashed an EP that is hard not to like. Its catchy, well written and whilst the production lets it down a few times over the 5 tracks, its forgivable when the rest of it is so good. The only problem I find is that whilst the formula they have down for catchy, well written songs is very good, it does get a little repetitive in places and I found myself going “have I heard that…already?”. As the press release for these guys says, its an overcrowded market out there for this kind of music, and now days being a solid band with good songwriting isn’t enough. They need something to set them apart from the rest of the crowd and create a strong hold of die hard fans to propel them onto bigger and better things. I hope they find it.

‘This One’s for You’ by Manhattan Coast is released on 17th February.