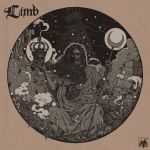 If doom and gloom is your ray of sunshine, then Limb are probably right up your street with their self titled debut album. Whilst it may heavily juxtapose the summer sun that’s started to sneak itself into our bleak British lives, ‘Limb’ will no doubt remind you that dark forces are forever at play. That, and that it’s only a riff if it makes you bang your head.

‘Twelve Ghosts’ opens up this ten track album with a slowly building, note held riff with plenty of noise and feedback developing into the head-banging riff that’s currently got a hold of my own head. This sludge opener delves into more of a 70s based verse before bringing it all back down for the groove; refreshing and juxtaposing. It’s a common trait dealt across the album that allows for plenty of styles to join the horde.

Another fine example is ‘Daemoness’ that has the slow, sludge riffs of old with the fuzz bass tendencies of the genre in a new age. Each song always follows a rollercoaster of textures, from the lonesome guitar chords that lead into the crashing kit, all culminating in a ferocious, pissed-off Godzilla like beast, stomping through cities across the globe because The Big Bang Theory has been renewed for another 3 seasons and thus, destroying everything in it’s path. And that’s before we even get to the throat splitting vocals like a banshee from the crypt. Imagine Godzilla with vocals like this and you’ve got yourself one hell of a reboot.

Whilst this formula is a bit predictable once the album finds its stride, it’s also not so bad from an overall perspective. It is a crucial part of, well, whatever you might pigeonhole this as, be it doom or sludge. And yes, my own inability to define the genre whilst making that last claim may seem hypocritical. However, it is good that it displays many different traits, although nothing is too surprising or thought provoking; just refreshing.

But it doesn’t matter though. Regardless of the similarity of song structures and riffs, it still does its job. If it makes you bang your head then it’s exactly how it should be. And in a live setting, a sea of heads nodding along will be better than any Mexican wave I’ve seen. If the next day is filled with hangovers and bangovers then a good night will have been had by all. So, whilst ‘Limb’ isn’t anything groundbreaking or outright surprising, it’s certainly a stepping stone and the first building knocked down on a rampage that’s only just beginning. Now bang your head, punk.

‘Limb’ by Limb is out now on New Heavy Sounds.