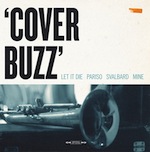 One of the many positive aspects of the UK’s hardcore scene is its co-operative and collectivist approach. Rather than clinging to bands in the hope of squeezing out a bit of cash, labels are keen to collaborate in order to release music that might not have seen the light of day otherwise, at least not in a readily available physical format. ‘Cover Buzz’ is just such a release – a collaboration between Dog Knights, Enjoyment, Cult Culture, Moshtache and Tangled Talk Records showcasing the talents of Let It Die, Pariso, Svalbard and MINE. Spanning the separate but closely related genres of Punk, Hardcore and Power Violence, both in source material and interpretation, this six-minute collaboration offers much more than expected and is overall a refreshing take on a diverse set of older and perhaps forgotten tracks.

First up is Let It Die’s cover of 7 Seconds’ ‘War In the Head’. While the source material is the most straight-up punk of the four tracks, Let It Die have ramped up the aggression both vocally and instrumentally, transforming the track from an expression of rebellious angst into a bout of sheer hardcore fury. Obviously the advancement of the technology over time is a factor but the production of the track is also far thicker and muddier, lending to a chaotic Converge-esque atmosphere. This approach is certainly a divergence from the original but provides an alternative take on the track that, in my opinion, suits it better, mainly because a harder-edged sound seems more fitting with a 40 second song length.

Next is Pariso’s cover of both Witchcult’s ‘Straight Hypocrisy’ and Weekend Nachos’ ‘Image’ condensed into one track. Considering that the former of the two original songs is easily the most frantic, it would be expected that covering a power-violence track would lead to similarly frantic results, Pariso instead opt for a slow trudging take on the song which gives a more brooding tone. The result of this interpretation is a more accessible hardcore song, but intersected blast beats provide variety and keep it from becoming stale. Unfortunately the second track makes less of an impression as it is much shorter and less varied from the original, making it feel like more of an afterthought.

Unfortunately Svalbard’s cover of Victims’ ‘This Is The End’ is less interesting than the other tracks on this release. Having not heard the original version before listening to this EP, I found the cover to be the most solid and engaging on the tracklist but in context, after having heard Victims’ version, the near like-for-like performance leaves it feeling slightly unnecessary as a recording. While in itself it is a great example of a d-beat punk song, it would perhaps be better left for a live setting and a more adventurous cover recorded instead.

Finally, MINE’s cover of ‘Everybody Hates Me’ by Tear It Up ends the release on a strong note. The cover sticks relatively close to the original, keeping the same pace and structure, but takes a more hardcore edge to the punk tune, making use of lower chords, distorted bass and more simplified instrumentation to come across more ‘to the point’. On top of that, the rough production style and single guitar track give the recording a more chaotic and grim feel that is not present in the original. This is a perfect example of a cover version adding a new element to a song that wasn’t there before without tampering with what makes that song what it is, something that is often subtle and not easy to do.

This EP was undoubtedly a treat to listen to. It just goes to show that collaborative efforts lead to unexpected and fruitful outcomes – hopefully more bands and labels take notice to release more of the same in the future.

’Cover Buzz’ by Let It Die, Pariso, Svalbard and MINE is released on 14th October on Dog Knights/Enjoyment/Cult Culture/Moshtache/Tangled Talk.