Album Review: Lay It on the Line/Arizona – Split EP 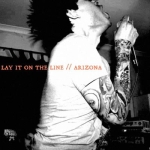 London based melodic-hardcore group Lay It On The Line have teamed up with Belgian rock boys Arizona to bring out this ‘Split EP’ – two songs from each group, taking on passionate emotive hardcore to an acoustic number.

Starting with Arizona, their two tracks is melodic rock with undertones of hardcore and metal, they also provide the acoustic track giving the EP a chilled out closing.

‘I Knew A Girl At School Called Pandora, Never Got To See Her Box Though’ is a mouthful of a title to say the least, combining heavy guitar lines and clean vocals it is a pretty standard rock tune, towards the ending however you see it pick up with a heavier feel, the guitars are still ferocious (a bit cliché in terms of riffs) and the vocals step up to the heavier instrumentation.

Their second offering ‘I’m Not A Superhero, I’m A Latter Day Saint’ (another mouthful, quirky title) ends the EP on a mellower mood. In ways it is maybe an anticlimax but nevertheless an interesting way to end. It even has a jazz inspired breakdown, making it again an interesting listen.

Lay It On The Line are a band I have actually had a running with, in the shape of their debut mini album ‘Crowhurst’. However I have slept since then (amongst other things) so any preconceptions I had of this band are hazy and can be dismissed. I have to say I love their two track offering. As a band they seemed to have stepped up and found a sound they’re comfortable playing. Their two songs centre around the theme of a close friend being killed and in comparison to the concept of ‘Crowhurst’, they’ve also seemingly changed lyrical direction. If you are familiar with bands like Polar, Up River and Dead Swans,then Lay It On The Line are another band doing the melodic-hardcore sound. ‘Therapia Lane’ and ’…Now I Own His Washing Machine’ are both fast paced hardcore tracks, stereotypical in sound but done well. I’ll certainly be keeping my out on these guys.

This ‘Split EP’ is interesting as it showcases two very different bands in terms of sound; it makes for an interesting split though, maybe something that should be picked up on? As a whole, it is a good listen however I do prefer the Lay It On The Line side but that is personal preference. It is available from their bandcamp for free so it is well worth checking out.

‘Split EP’ by Lay It on the Line/Arizona is available now.

Lay It on the Line links: Facebook|Bandcamp