Album Review: Lay It On The Line – Vigilance EP 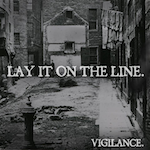 Lay It on The Line are a London based hardcore band featuring ex members of Hang The Bastard and Phinius Gage. As their collective CV would suggest, the band blends elements of both hardcore punk and more downtrodden, riff laden hardcore, resulting in a sound that is equal parts melodic and hard hitting. Both personal lyrics and historical concepts make their way into the band’s band catalogue, helping to separate them from the cliches of hardcore lyricism and add substance to skill – neither of which are absent from new EP ‘Vigilance’, a follow up to the split with Arizona and ‘Crowhurst’ full length, both of which were released this year.

Stylistically the band doesn’t do a great deal to stray from the path with this release compared to their back catalogue, but they are noticeably tighter and have taken to writing the EP with a refined songwriting muscle. As ever there is a good deal of variation in the types of songs written – some focus on a more up-tempo melodic hardcore approach whereas others are more riff laden or even foree into beatdowns, all of which accompanied by vocals that sound suitably wretched and pained in their consistent delivery. This variation undoubtedly keeps the sound from getting stale and surprisingly does not feel disjointed, which would be a distinct possibility in theory.

However, the downside to this is that ideas can sometimes feel underdeveloped, as the generally short song lengths and frequent shifts in style leave certain ideas lacking a feeling of resolution. For example, opening track ‘Condemned: Parts I and II’ finds itself breaking from a very contained mid-tempo parts into upbeat octave-driven melodic passages for no more than 20 seconds at a time – these parts undoubtedly flow as they are but it feels like there is a missed opportunity to make the most of each section, rather than being eager to jump from one to the next.

Backing up the songwriting on this EP is the production, which does a fantastic job of letting the best performances shine at any given moment, as well as giving the songs a sense of continuity. The guitars sound crisp and biting, with clean and reverb-soaked parts laying low in the mix to provide some ambience without hindering the aggression. The drums sound equally well produced – full and warm without sounding particularly over-done. The bass sounds well rounded and peeks into the mix when the guitars dip, particularly in ‘Petticoat Lane’, finishing off the sound of the EP nicely.

Bookending the tracks is a set of sound samples from a reading of Edgar Allan Poe’s The Tell Tale Heart, set to a tightly chugged introduction and a contemplative clean guitar driven outro. These samples give the EP a complete feeling, as if the songs (at least the first and last) were written to fit into a bigger picture rather than separate pieces of music thrown together.

Lay It On The Line have done well with this release. The performances are solid, the songs are well crafted (if not in need of a little fleshing out) and the songs come across as a solid unit. Certainly in terms of production at the very least, the band are sounding better than ever. On the whole this is definitely well worth a listen.

‘Vigilance’ by Lay It On The Line is out now on Lockjaw Records.

Lay It On The Line links: Facebook|Tumblr|Bandcamp