Album Review: Larry and His Flask – By the Lamplight 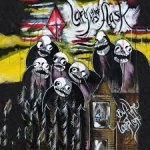 The back story to Oregon’s Larry and His Flask began in traditional punk rock three-piece foundations. By 2011, several albums into their career, the band took a huge stylistic overhaul, with additional faces added to the repertoire; this was found on fourth full length ‘All That We Know.’ Now a band of six members, Larry and His Flask continue to relish in their bluegrass-fuelled folk-punk with new full length ‘By the Lamplight.’

The main draw of this record is how multi-layered it is in its flow and sound. Soul, bluegrass, folk and punk provide a delightful twist, whilst the mix of instruments, including harmonica, mandolin, violin, banjo and brass, bounce off of each other wonderfully. Further evidence to this multi-layering can be found in the rhythm and tempo in each song. ‘Out of Print’ and ‘Home of the Slave’ feature fast, light-hearted riffs and an energy originating from a 50s radio station.

The gypsy-esque ‘Log, Heat and Ash’ has a certain graceful dance to it, as it is led by a mandolin and banjo on either side. ‘Barleywine Bump’ starts off with lo-fi vocals upon a slow jam, which accelerates into a whimsical fun tempo. Meanwhile, songs like ‘Come from You’ disguise themselves as solo reflective acoustic numbers, but eventually creeping sounds including keys, harmonious backing vocals and percussion burst out in full swing.

Whilst the delivery of the music is the crucial draw to Larry and His Flask, the focal point of the band should be accredited to the vocal delivery. Ian Crook sounds great, giving a fine balance that is of a humble and gentle nature. All the while the backing vocals give that extra “oomph”, adapting to the tempo and rhythm of each song.

As a record, ‘By the Lamplight’ provides a striking introduction to the outfit known as Larry and His Flask. Their mix of bluegrass, folk, punk and soul along with the many instruments they utilise offers a delightful listening session to one’s senses. If you’re stuck in that deprived state and appetite for fun, then switch this record on and let the music whisk you away.

‘By the Lamplight’ by Larry and His Flask is out now on Xtra Mile Recordings.

Larry and His Flask links: Facebook|Website|Twitter