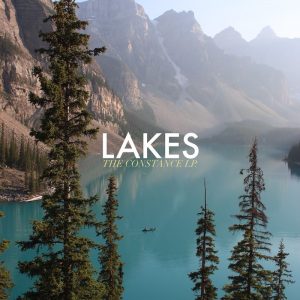 Lakes have certainly been busy. As well as spreading their emo-infused, sparkly “glock-rock” around Watford’s circuit of pubs and clubs, the sextet have also been independently recording all of their music and producing their own series of videos to support the release of debut album ‘The Constance LP‘.

‘Constance‘ kicks off the ten-track LP wonderfully, its shimmery allure and pop-like beats contrasting with the song’s lyrical themes of breaking out of a toxic relationship. Next, ‘Reindeer‘ remains uptempo with twinkly guitar jangles reminiscent American Football.

‘Geneva‘ is a solid standout, continuing with the twinkly guitar work while the male-female dynamic of the vocalists Sam Neale and Roberto Cappellina fuses to create memorable harmonies with their trademark glockenspiel interspersed throughout. Similarly, ‘Baikal‘ is another true showcase of the band’s abilities, the vocals and the instrumentation layered with stunning intricacy throughout.

Penultimate track ‘Como‘ features the slow repetition of  “I hear you completely, to deceive you, believe me, but I need you to read me” bound to get crowds singing along, building up to an explosive crescendo with ambient background guitar playing the song out. Finally, ‘Erie’ sees the LP end with a gentle, acoustic offering. While you half expect it to suddenly erupt with the same energy as the rest of the record, it remains calm and modest to the end which ties everything up with grace.

Overall, ‘The Constance LP’ is a fantastic introduction to Lakes, showcasing their abilities as a band to draw influence from pioneering names in mid-western emo, math rock, and alternative indie but create something that is unique to them. Each song is named after a lake, which is a nice touch that bonds the LP together but the tracks themselves maintain their individuality, creating a thoroughly enjoyable listen from start to finish. With the record’s tasty mix of familiar, well-tested elements blended with their own unique infusions, the future is definitely looking bright for Lakes.

‘The Constance LP‘ by Lakes is out now on Friend of Mine Records.