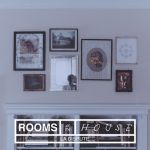 ‘Rooms Of The House’ is La Dispute’s best album yet. If you trust my judgement you could easily stop reading at the end of this sentence and go and buy the album for yourself. However, you’re still reading, which is just more time you’re wasting here that you could be spending listening to the album. Your loss.

‘Rooms Of The House’ doesn’t pick up where ‘Wildlife’ left off. It’s a whole new chapter for the band in which the bar is raised yet again. It’s the kind of listen where on first listen you know that it’s something special, yet on each listen it means so much more than it did the previous time it graced your ears.

Whilst the overall sound and package of the album feels more mature, it’s also more adventurous. Musically the band are gently toying with so many different genres, making their way through one whilst gently lacing another over certain areas, then finishing and launching into something else. But despite this, the album as a whole works incredibly well. The first two tracks are quite a juxtaposition to the third, then the fourth and fifth are again, more out there and adventurous than the sixth. But, the beauty is that they’re all clearly La Dispute songs. And not just because of the incredibly identifiable work by front man Jordan Dreyer; it’s the whole package. I don’t think the vocals would be as powerful without the music backing and I don’t think the music would have as much meaning if the lyrical content wasn’t there.

I’ve always found lyrics to be a key part of a song for myself. I listen more to lyrics than the music and so La Dispute had myself hooked instantly. The spoken word approach is just completely different to any other bands similar to La Dispute and it sets them apart so, so much. To me, it feels way more like an art than anything else. There’s something in the storytelling nature, the lexical choices made and the delivery on each individual track that makes it a strong song independently and as well as within the context of ‘Rooms Of The House’. From the soft, spoken chills of ‘Woman (In Mirror)’ to the heartfelt aggression laid bare on ‘Stay Happy There’. I think every song is a favourite for someone out there and it’s because of the personal connection that everyone will make. The lyrics feel so much more personal, more thought provoking and I’m sure the band are looking to make that connection between their music and the people who listen to their music, be them fans or first time listeners.

There are a few bands around at the moment who seem to only be able to produce better music which each album and La Dispute are very firmly in that group. The only thing that worries me here is that they have really set the bar so high. I think the majority knew ‘Rooms Of The House’ would be good, but maybe not this good. And that’s not to doubt La Dispute, it’s just that as previously mentioned, they’re better with each release.

So, even though the bar is even higher once again, we can probably rest assured that in two to three years time we’ll have an even better collection of songs and everyone will know just how good La Dispute are. And seeing as you have gotten this far hopefully you’ll want to go and listen to ‘Rooms Of The House’. But don’t forget that no matter how much you enjoy it on your first listen, you’ll be enjoying it more each time.

‘Rooms Of The House’ by La Dispute is out on the 18th March on Better Living and Big Scary Monsters Records.