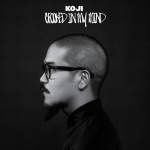 Koji brings us his debut full length ‘Crooked In My Mind’, an acoustic based album supported by the Lauryn Hill band, La Dispute, Title Fight, and Balance & Composure. The man behind Koji, Andrew Koji Shiraki, is an advocate for many groups, like Invisible Children, and often involves storytelling, visual art, and media into his live shows to bring the focus to empowering youth with positivity. This motive shines through in his lyrics, and you are left feeling that every note and every word is deliberate.

An acoustic-based album can be difficult to pull off, but Koji has no trouble crafting a dynamic album that avoids monotony and is instead full of interesting and unique lyrics, melodies, and rhythms. ‘Distance/Divide’ is sultry, with melancholy lyrics that give a touch of dramatic emotion while keeping it mysterious. Vintage sounding guitars give it a throwback vibe that sets it apart. ‘Creeping’ highlights Shiraki’s clear, powerful voice and meaningful lyrics whilst incorporating strong instrumental melodies.

There is a range of emotions that flows through ‘Crooked In My Mind’. The frantic anxiety in ‘Fragile Times’ moves into a calm chorus with strings and light percussion, acting like a rollercoaster of emotion in one track. ‘Pang And Flash’ is much quieter and calmer than the rest of the album, with mellow acoustic guitars and a sense of pain and frustration coming through the lyrics and vocals. Turning this around is the final track, ‘What You Leave Behind’, an upbeat and pop-tinged song with staccato rhythms and sparse guitars, and barely-there drums that culminates with tons of sound. Strings, guitars, drums – really every sound on the whole album – comes together at the end for a grand finale sound.

This album is unique. It is not often you encounter an acoustic based album that avoids the pitfalls of repetition and monotony. Koji’s melodies are so strong that when the repetition of lyrics – which ‘In The Line’ presents beautifully – comes, you’re happy to hear them again because the melodies are so infectious. ‘Crooked In My Mind’ is an emotional and message-filled journey that is beautiful, dynamic, and refreshing. If you love acoustic music, this is a must-listen.

‘Crooked In My Mind’ by Koji is out now on Run For Cover Records.