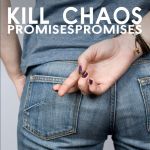 It’s rare you get to hear a record as quintessentially British as Kill Chaos’ debut album ‘PromisesPromises’. Note the reference to Britain as a whole, as though this trio hail from the environs of the East Midlands and South Yorkshire, their line of influence encompasses styles from all 4 constituent parts of the United Kingdom – taking as much from English compatriots like Reuben and Hundred Reasons as they do from Scots such as Biffy Clyro and Sucioperro, simultaneously embracing the Welsh sounds of Feeder, as well as Northern Irish rockers Fighting With Wire. This initial full-length release comes after six years as a band, but this is a record that would fit more comfortably in the musical climes of their year of inception than those of today.

‘PromisesPromises’ commences with ’Boy Done Good’, a snarling curtain-raiser that puts the listener on edge from the get-go with a menacing bass tone and every hit on Tom Waddingham’s drum kit feeling like a gut shot. Kill Chaos continue to apply considerable bite with the intense grooves of ‘Crush’, but it’s on the melodic and widescreen ‘Falling Down’ that the most favourable side of the three-piece emerges. Weighting their anthemic tendencies with considerable punch wonderfully, ‘Futures’ continues the record’s upbeat element, rounding off an empathic opening four tracks on ‘PromisesPromises’.

However, as lovely as a tread down the leafy surroundings of Memory Lane has been thus far, Kill Chaos get rather bogged down in the rut of reminiscence they have created for themselves. As evidenced by the continual success of seemingly endless reunion tours, the (slightly) elder statesmen of the rock-consuming community love to revisit the sounds of their adolescent years, but it’s hard to see what kind of appeal a song like ‘Make Yourself A Smaller Target’ might hold beyond the staunchest of BritRock aficionados. The emphatic power-pop of ‘Let’s Play Politics’ shows the vitality this band can purvey at points on this album, but their tendency to regress into retrospective tropes ultimately proves detrimental to the quality of this record.

The closing segment of ‘PromisesPromises’ starts well on the hard-rocking ’Fists#Pistols’, but ‘Company Of One’ is little more than filler and though ‘OK On The O.K.“ attempts to recreate the album’s darker elements found at the beginning, it doesn’t possess the same standard-bearing quality found on the initiative efforts.

Though ‘PromisesPromises’ brazenly flies the flag for the glory days of BritRock and wears its diverse influences on its sleeve, simply reliving those halcyon days without an injection of Kill Chaos’ own personality sees this album sadly fall short after promising(promising) so much. Save for the odd reunion tour, certain component parts of the scene crashing into the mainstream and the recent re-emergence of Jamie Lenman (who KC support on his upcoming tour) as a solo artist, the original incarnation of BritRock remains a fondly-remembered era – this will please some of its devotees, and possibly some of those too young to catch it at its zenith, but in these eyes Kill Chaos need to innovate to become much more than an anachronistic revisit to the older parts of your record collection.

‘PromisesPromises’ by Kill Chaos is out now on Field Records.