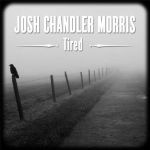 I’m pretty tired at the time of writing. Tired to the point of excessive yawning and watering eyes to which it could easily look like I’m crying if you caught me at the wrong time. Aptly, ‘Tired’ is the name of this EP by Josh Chandler Morris of Anti-Vigilante. However, it’s not doing much to keep me awake.

Folk/acoustic music can swing between the uptempo and the ‘down-in-the-dumps’ sort of motifs. The EP does swap between the two like friends around a campfire, sharing stories of love and sorrow, but it’s expected. ‘Forgive Me’ and ‘Easy To Judge’ both feature the more uptempo standard, but both sound so similar to each other; again and again with that tambourine. I’m not the biggest fan of folk by any means and so I do question my own judgement on this review. I mean, there’s nothing that’s really striking me as incredibly unique or significant that will prompt myself to any further listens once the typing has been done. It just feels like the same clichés and coming back to it for another listen only makes me realise that it really is quite, well, boring.

As a very obvious comparison to make, Frank Turner has certainly brought a mainstream/popular music element to his later work but that’s still not denying that his music is memorable and heartfelt in and amongst the various tracklistings each album provides. Even the more traditional stuff is at a much more significant level than this and songs like ‘Worse Things Happen At See’ remind me that emotive lyrics and a passionate vocal take really can make a song more than just a song; this isn’t the case here.

There’s got to be something really special when it comes to this sort of music to really make an impact. With fewer instruments, there’s a yearning for much more emotional impact through the carefully woven lyrics into the incredibly thin tapestry of instruments. ‘Tired’ isn’t special. There’s no magic here. There’s some honesty and personal lyrics, but then again, isn’t there usually? It’s kind of my point really. Whilst it’s not bad at what it is, there’s nothing new either.

‘Tired’ by Josh Chandler Morris is out now on Harsh Realm Records.