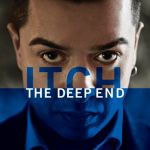 It’s safe to say that Jonny Fox, more commonly known as Itch, has had a more colourful life than most. From living in a squat as a teenage punk, to fighting for his fiercely held political beliefs as a self-confessed anarchist at protests up and down the country, to rising to prominence as frontman of genre mashing ska punks The King Blues, Itch has the sort of heart belied by his slight frame and a burning intellect at odds with his background.

After the band that gave Itch a chance at an unexpected career in music came to a messy and acrimonious end a year or so ago, it was unclear where the enigmatic and outspoken Londoner would turn next. After two free released EPs, Itch is back with his Red Bull Records backed debut solo album ‘The Deep End’.

Largely co-written with producer John Feldmann (The Used, Good Charlotte, Natives) Itch has left his simple ska roots largely behind. ‘The Deep End’ is a slick and eclectic record with practically every track taking its basis in a different genre. Despite this, the over-riding sound is a surprisingly commercial one, and there is a sense that Itch and Feldmann have pointedly written a record with as much mass appeal as possible (thankfully keeping Itch’s occasional OTT political tendencies to a minimum). Consequently electro, hip-hop and dubstep elements are equally as prominent as the ska and punk rock sounds on which Itch cut his musical teeth.

’The Deep End’ manages to squeeze in almost as many guest appearances as it does musical genres, most of the songs see Itch rapping or speaking the verses with a collaborator singing the chorus hook. Although Itch is far from the world’s greatest rapper, his trademark delivery is as raw and honest as ever, and some of the guest vocals leave a much stronger impression then had he sung the part himself. The most notable appearance is that of Taking Back Sunday’s Adam Lazzarra who utterly steals the show in the album’s stand out track ‘Homeless Romantic’. The merging of acoustic-ska punk and an RnB chorus hook on ‘Laugh’ also works much better than you would expect in another of the record’s most enjoyable moments.

Also standing out from the slight over reliance on generic and tedious dubstep tracks is properly infectious doo-wop influenced number ‘Another Man’, which features Itch’s vocals duelling for attention with a brassy powerhouse vocal performance from former American Idol contestant (and wife of The Used’s Quinn Allman) Megan Joy. Although it’s unlikely to win too much love from King Blues fans, ‘The Deep End’ shows that Itch has genuine musical versatility, and with the right choices of singles, the right radio and media exposure and a little luck, has the potential to push Itch to mainstream pop super stardom.

‘The Deep End’ by Itch is out now on Red Bull Records.