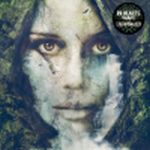 Most of us are aware and can appreciate the natural beauty and wonder that Australia has to provide (yes, I am a geographer), and this is especially relevant for Australians while PM Tony Abbott continues to ignore the effects of climate change. Therefore it comes as no surprise that Australian 5 piece hardcore outfit In Hearts Wake have dedicated their full length album, ‘Earthwalker’, to it. This is now their second release under label UNFD following their critically acclaimed ‘Divination’.

The ethereal introduction of ‘Gaia’ launches straight in to the second track on the album; ‘Earthwalker’. The chunky riff is layered with screaming vocals, accompanied by intricate rundowns and harmonics. This is contrasted in the chorus by the clean vocals of the newly added bass player Kyle Erich. The breakdown is brought about by a building rant only to trail off into a snarl of frustration, and it just wouldn’t be hardcore without an evil laugh in the middle would it?

However, my favourite track of the album has to be ‘Afterglow’. The explosive riff, melodic harmony and beautiful syncopation had me hooked. Pause, “IN THE AFTERGLOW”, and the vocals begin leading in to a pacy double time beat; dual vocals complimenting each other to the chorus. For me though the double time verse and droning chorus was too cliché, and I wish they had been as inventive with the rest of the song as they had been with that opening riff. Although, I cannot fault another filthy breakdown.

The final track, ‘Mother’, is the last of the album as a slow paced instrumental song with narration from the persona of what is supposed to be ‘mother earth.’ This song continues the theme of the album, and in my opinion, summarises it with the main message; “this land does not belong to you – it is you who belongs to this land”.

The saving of the planet and hardcore is a combination that you would not expect, but In Hearts Wake strangely pull it off. Definitely for fans of The Amity Affliction and Parkway Drive, this band is certainly an up and coming one with their growing fan base and ever more expansive touring. I have to give them credit where it is due, for only a second major release, In Hearts Wake have delivered well.

‘Earthwalker’ by In Hearts Wake is out now on UNFD.