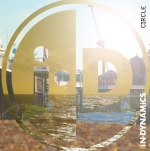 Somewhere between the utterly magnificent and the absolutely average lies this release from In Dynamics. There are times when you’ll want to be drunk as all hell and singing along to their main stage headline set at whatever festival you’re imagining, and others when you just don’t want to be watching a generic indie set anywhere at all. To put it blunty, ‘Circles’ is both wonderful and thoroughly frustrating, and it switches on a listen-to-listen basis.

Opening track ‘Equal Ground’ gives a bit of a scare. Starting with a beautiful melody and riff, and powering on throughout, it falls prey to one of my least favourite things in all of music – the over use of rhyming couplets. Seriously, World, not every line has to rhyme with the previous, eventually things just start sounding like a Spike Milligan poem. The vocals are promising, however. A stunning performance from frontman Beau Bolden that remains constant throughout – except perhaps the weird indie/rap/spoken verses of Liposuction.

The longer that ‘Circle’ goes on for, the better it gets. ‘Symmetry’ should have been the opener. The whole track is exactly what ‘Equal Ground’ wants to be. It’s solid, soaring, heavy and soft, and comes with stunning vocals that really didn’t get enough chance to shine in the prior tracks. Single ‘Running Hands’ is the prime example of how In Dynamics find themselves caught between brilliance and the boring. Again, the verse is the let down. Trying a little too hard to be angular and ending up sounding of an indie cliché. The chorus and its build up on the other hand, are sublime. Hands in the air, heart swelling rock and roll.

In Dynamics save the best for last and ‘I Never Make Sense’ is just killer. Like Biffy Clyro only bigger, the closer is so massive it seems to hover above everything else. This is a song that deserves a light show, deserves a big crowd, and deserves to be listened to – Frankly awesome.

Generally speaking, this is a great EP, probably not suited to all moods and moments but when you fancy something along these lines it will be unbeatable.

‘Circle’ EP by In Dynamics is released for free on 19th August on Bandcamp.