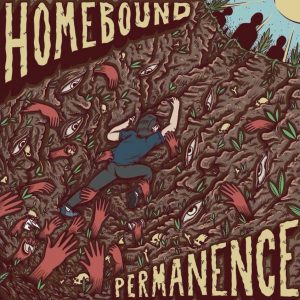 While nothing ground-breaking, Homebound’s sophomore effort ticks every conventional box for an entertaining, emotion-laden record.

Home-grown pop-punk is currently riding on the crest of a wave. With the successes of Neck Deep and As It Is, the stakes of a genre that once quivered in the shadows have never been higher. Farnham’s Homebound have stepped forward less than a year after debut ‘Coming Of Age’ to prove their worth at a time where revolution is crucial, however ‘Permanence EP’ fails to offer anything wildly innovative. However, should genre upheaval matter when a band clearly enjoys what they’re playing?

True to their genre’s well-trodden path, opener ‘Blossom’ opens with nostalgic presence driven by contemplative guitars, although a little too much time is spent on the instrumental. “My bones may break but the words stay true, everything I know I owe it all to you,” cries the heartfelt monotone of vocalist Charlie Boughton in true pop punk contemplation. Similarly, the racing heartbeat of ‘Worthwhile’ projects a dire loneliness that unashamedly takes everything to heart, portraying a wounded ego with every sorrowful note passing the lump in Boughton’s throat.

“Seasons change and your friendships will fade,” warns ‘Bittersweet’, as the summer anthem teams up energetic guitars alongside Americanised vocals with a distinct southern English twang – sure, it’s been done before, but it’s good to hear nonetheless. A restless and determined self-assertion, ‘Grounded’ reminds that “we all have a point to prove,” as Sam Taylor defines his consummate talent while raging behind the drum kit.

There’s only so many times you can try before you give up, as the larger-than-life ‘Cave In’ reminds. Transitioning from an acoustic opening to a melodic existential contemplation narrated by Boughton’s familiar disdainful tones, the EP closes on the perfectly-executed sorrow the genre has spent years trying to put into words.

It’s a tough task, breaking a mould that everyone’s been sitting in for far too long. While Homebound haven’t succeeded in that colossal mission, they’ve created a fully enjoyable record from start to finish with ’Permanence EP’, which is an achievement in itself.

‘Permanence EP by Homebound is out now on Failure By Design Records.