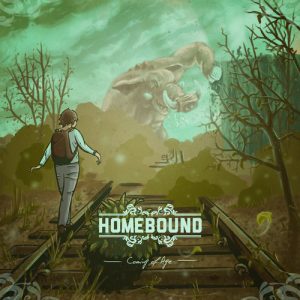 For far too long the UK Pop-Punk scene has been something of bashful beast with far too many hang-ups about its own identity and a frequent crisis of confidence and purpose. Admittedly being dropped like a bad habit by many of the bands to have emerged from its ranks and made it to the lofty heights of national radio and TV airplay hasn’t helped. Nor has the long-running problem of trying to sound too much like American acts.

However, in the last year or two, there have been the subtle signs of the beginning of a resurgence in the genre. A steadily growing array of young UK bands, happy to sing in their own accents and writing some of the freshest sounding pop-punk to be found anywhere in the world. Farnham quintet Homebound are the latest new band to emerge from this confident new scene and their debut EP ‘Coming Of Age’, out this week, is one of the brightest British pop-punk debuts in a seriously long time.

From the get go the riffs are crisp, punchy and begging to energise a room of kids into pogoing their hearts out. The vocals strike a great balance between melodic and shouty and the hooks are simple but infectiously effective. Opener ‘Valour’ maybe short and sweet, but its bouncy four chord riff is as energising as a four pack of Monster and it works very well as an introduction to the band and to set the tone and pace for the rest of the EP.

Second track ‘Turning Point’ rockets off at a thousand miles an hour with instantly dropping rapid fire vocals, before making good use of short breakdowns between the verses and choruses to balance out the energy and timing of the track.

’Highground’ provides one of the EP’s heavier moments and does impressively showcase the band’s refreshingly mature and introverted lyrical style. ‘Clutching Straws’ features some euphoric high-tempo guitar work as well as showing the passion and fire in Charlie Boughton’s vocal performance.

Title track ‘Coming of Age’ provides a suitably emphatic rousing finale and is a track that will likely be a highpoint of Homebound’s live show.

’Coming Of Age’ marks a bold and striking debut from Homebound and could earmark them as standard bearers for the scene to rally around. Fans of State Champs and Real Friends can also enjoy having a homegrown act to add to their favourite bands list.